TERRE HAUTE, Ind. (AP) - The U.S. government on Friday put to death an Iowa chemistry student-turned-meth kingpin convicted of killing five people, the third execution by the federal government in a week.

Dustin Honken, who prosecutors said killed key witnesses to stop them from testifying in his drugs case, received a lethal injection at the Federal Correctional Complex in Terre Haute, Indiana. Two others were also put to death during the week after a hiatus of nearly 20 years, including Kansan Wesley Purkey. His lawyers contended he had dementia and didn’t know why he was being executed.

The first in the spate federal executions happened Tuesday, when Daniel Lewis Lee was put to death for killing a family in the 1990s as part of a plot to build a whites-only nation. Lee’s execution, like Purkey’s, went ahead only after the U.S. Supreme Court gave it a green light in a 5-4 decision hours before.

Honken, of Britt, Iowa, had been on death row since 2005 and was the first Iowan with a death sentence imposed by Iowa jurors to be executed since 1963. Iowa struck the death penalty from state statutes in 1965, but Honken was eligible for the death penalty under U.S. law because he was tried in federal court.

RELATED: Another federal execution set for Wednesday after 1st in decades carried out in Indiana

Honken was pronounced dead at 4:36 p.m., the Bureau of Prisons said.

Honken, whose crimes struck at the foundation of the U.S. justice system, always seemed the least likely to win a reprieve from the courts.

Mark Bennett, the now-retired federal judge who oversaw Honken’s 2004 trial for the kidnappings and killings, said previously that he generally opposed the death penalty. But if anyone deserved it, he added, it was Honken.

While out on bond in his drugs case in July 1993, Honken and his girlfriend Angela Johnson kidnapped Lori Duncan and her two daughters from their Mason City, Iowa, home, then killed and buried them in a wooded area nearby. Ten-year-old Kandi and 6-year-old Amber were still in their swimsuits on the hot summer day when they were shot execution-style in the back of the head.

RELATED: US executes 2nd man in a week; lawyers said he had dementia

Their primary target that day was Lori Duncan’s then-boyfriend, Greg Nicholson, who also lived at the home and was also killed. He and Lori Duncan were bound and gagged and shot multiple times. Honken had recently learned Nicholson, a former drug-dealing associate, was cooperating with investigators and would likely testify against Honken at trial.

Lori Duncan didn’t know Nicholson was an informant and she wasn’t involved in drugs.

As the investigation into Honken continued, he killed another drug dealer working with him, Terry DeGeus, beating him with a bat and shooting him.

Honken had earlier informed the judge in his drug case that he would plead guilty at the end of July. But days after the still-undiscovered killings of Nicholson and the Duncans, he told the court he would stick to his not guilty plea. 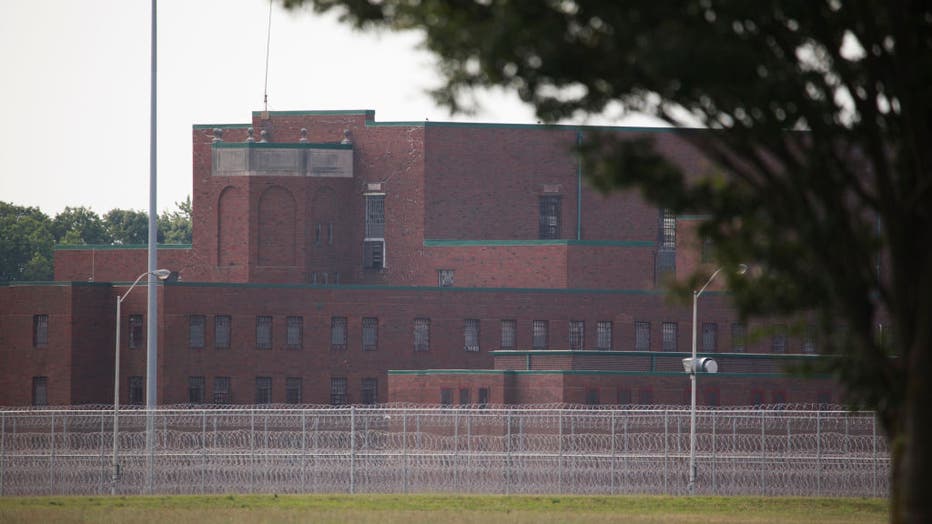 View of a perimeter outside the Terre Haute Federal Correctional Complex. (Photo by Jeremy Hogan/SOPA Images/LightRocket via Getty Images)

Investigators found the Nicholson and Duncan bodies only seven years later, in 2000, after Johnson scrawled out a map showing a jailhouse informant where they were buried. DeGeus’ body was found a few miles from the wooded area.

Honken was considered so dangerous that the judge took the rare step of impaneling an anonymous jury. Other security measures included fitting Honken with a stun belt under his clothes to prevent him from trying to escape.

Johnson, Honken’s girlfriend, was convicted in a separate trial and sentenced to death. Bennett later reduced her sentence to life behind bars.

Over recent days, prison authorities permitted Honken to make his last calls to family and friends, according to Sister Betty Donoghue, a Catholic nun whom he called Wednesday.

On death row, Honken befriended Lee and knew his execution was called off one hour, then was back on another hour, Donoghue said.

“He was very upset with the way Danny died,” said Donoghue, who visited Honken regularly over the past decade.

Yet Donoghue, of the Sisters of Providence just outside Terre Haute, said she was startled by how calm Honken sounded over the phone.

“He was at peace. I was totally amazed,” she said. “He believed he would go to heaven. He is ready to meet his maker.”

At his sentencing in 2005, Honken denied killing anybody, but Donoghue said never heard him say he was innocent.

Honken’s mother, brother and college-aged daughter visited him in prison in recent days, she said.

Honken grew up in the northern Iowa town of Britt, the son of an alcoholic father with bank robbery convictions. But Hoken was regarded as bright and good at math. He went on to study chemistry at a community college, before dropping out to pursue a career dealing drugs instead.

He moved to Arizona and drew on his expertise in chemistry to produce highly purified meth in the hopes of getting rich. He and a friend distributed their product through dealers based in Mason City, Iowa.

At trial, Honken’s attorney, Alfredo Parrish, tried unsuccessfully to soften his client’s image, describing him to jurors as “basically a nerd” who became “infatuated with drug manufacturing.”