Judge Penny Brown is calling for a boycott of Amazon after the shirts were found on the website.

ATLANTA - A popular Atlanta judge is demanding an apology and is organizing a boycott after Amazon sold offense Biden-Harris T-shirts.

Judge Penny Brown Reynolds said she was surfing the internet when she came across the Biden-Harris T-shirts and clothing that calls the vice-presidential candidate a derogatory name that is synonymous with a prostitute and rhymes with Joe.

"There is a place that you cannot go and misogyny in the marketplace and corporate responsibility is such that we cannot have this. This is bigger than party affiliation and ideology. This is about decency," the judge said emphatically. 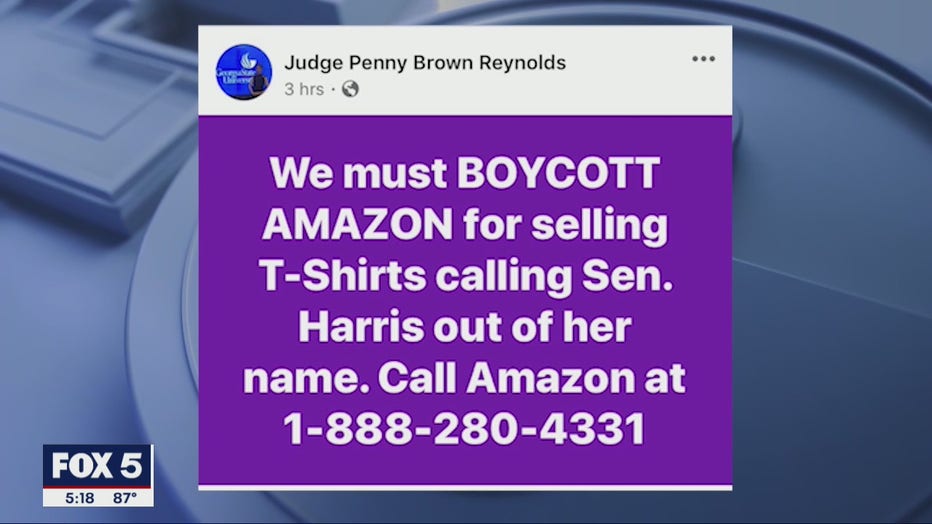 The popular judge isn't just complaining about the clothing. She has organized a boycott on Facebook and is demanding an apology from Amazon.

"When say call for a boycott, you're speaking of public pressure and that's what I want to do because I truly believe if Amazon executives knew that this was being marketed on their platforms, not only would they apologize but they would stop the selling of this, " the judge insisted.

Published reports indicate Amazon began removing the clothing Tuesday night, but Judge Penny said an apology is still needed. FOX 5 called and emailed Amazon for comment but those inquiries were not returned.

"This should have never happened. This is a sitting US Senator. If you are a woman, a mother, have a daughter, or are just a decent human being, you cannot accept this. This is Atlanta. Home of the late Congressman John Lewis, who was a hero. This is something to get in good trouble over,” the judge exclaimed.