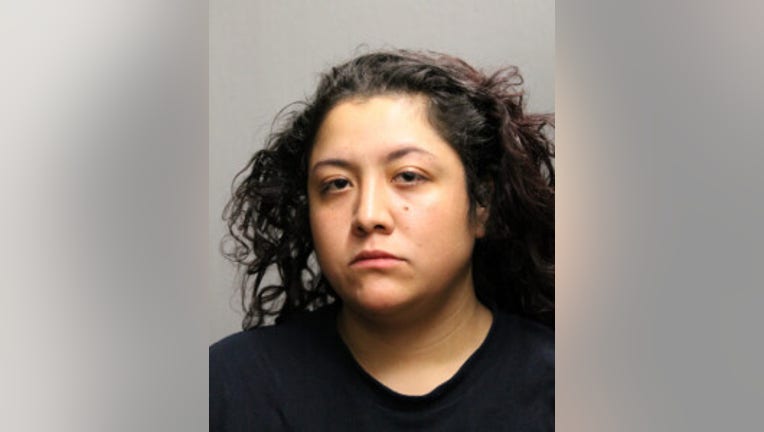 CHICAGO - A man traveling in a car on Lake Shore Drive over the weekend harassed a couple with his friends before he fired his gun, shooting out the eye of the 19-year-old woman inside the other vehicle, Cook County prosecutors said Wednesday.

The gunman hasn’t been arrested but 27-year-old Jennifer Medina, who was behind the wheel of the car from where the shorts were fired, has been charged with attempted murder.

Medina and her three passengers allegedly taunted and threw gang signs at the couple, asking them where they were from while both cars were stopped at a red light at Jackson Boulevard Saturday afternoon.

The couple tried ignoring them as the gunman stepped out of Medina’s car and said, “You can get it anywhere you want,” according to Assistant State’s Attorney James Murphy.

As the light turned green, the man got back into Medina’s car and allegedly fired one shot. The bullet went through the woman’s nose and through the side of her head, Murphy said.

The woman’s boyfriend tried to apply pressure to the wound while driving away from Medina and the shooter. But Medina allegedly maneuvered in front of him, blocking lanes of traffic as he tried to pass several times, Murphy said.

The man drove his injured girlfriend to Navy Pier and contacted security officials, who called 911, Murphy said. The woman was taken to Northwestern Memorial Hospital where she underwent surgery and had an eye removed.

“At the time, this was a Saturday just after 1 p.m. — a beautiful Saturday afternoon — and she [Medina] and her co-offenders basically turned Lake Shore Drive into a shooting gallery,” Murphy said.

Although Medina didn’t pull the trigger, Murphy argued that should be held without bail because she chased down the victims, allowing the gunman to fire his weapon.

“There’s one shot fired, and if it stopped there, that’s one thing… but this defendant doesn’t stop there. She continues to weave in and out of traffic… trying to chase the victim down so her co-offenders can fire more shots at that car,” Murphy said.

Police recovered one shell casing at the first shooting site, and multiple shells at the second site, Murphy said. The shootings were captured on police surveillance cameras.

Medina, of Bridgeview, allegedly admitted to driving the wanted car, which belonged to her parents.

The gunman and Medina’s two other passengers have not yet been charged.

Medina is a mother of two and has no criminal background, her defense attorney said. She graduated from the 11th grade and works in the dietary field, the attorney said.

Medina is expected back in court on Oct. 21.