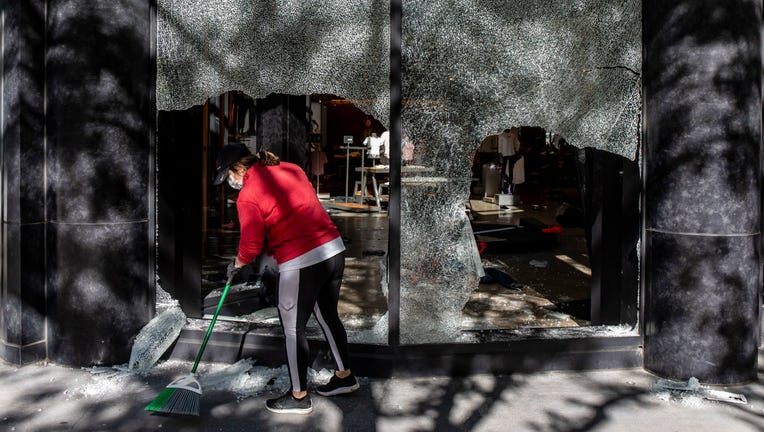 But Lightfoot said more officers were deployed to neighborhoods and more city resources would be forthcoming, including use of sanitation trucks to close roads.

The number of 911 calls soared to 65,000 over a 24-hour period ending at midnight, which is 50,000 more than usual, Lightfoot said. Police arrested about 700 people Sunday mostly on the South and West sides, according to Police Chief David Brown.

“We didn’t stand by and let the South and West sides burn,” Lightfoot said. “There is no way, no way, that we would ever let any neighborhood receive more resources and protection than any others, ever. And that certainly didn’t happen over the course of the weekend.”

Pritzker’s action came as demonstrations resumed in Chicago, where hundreds gathered on the city’s North Side to protest Floyd’s killing. The peaceful protesters gathered at an intersection in the city’s Uptown neighborhood before marching south toward the central business district, scenes of clashes with police and looting over the weekend. Police headed the marchers off after about a mile and directed them back north to where they started.

For a second consecutive day, Chicago Transit Authority train and bus service was suspended beginning at 9:30 p.m. until 6 a.m., officials say for the safety of riders and employees.