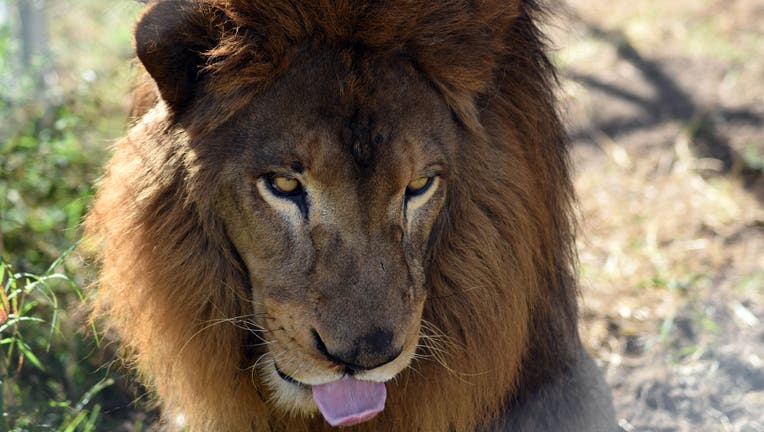 View of a lion, from a group of 12 tigers and 5 lions that had been rescued from Guatemalan circuses, before being transferred to South Africa.

WINBURG, South Africa - Twelve tigers and five lions have been relocated to a sanctuary in South Africa after being rescued from circuses in Guatemala following years of abuse and confinement.

The animals, both cubs and adults, are among 200 that have been rescued from the circus industry in Guatemala, Peru, Bolivia and Colombia within the past decade. The countries have banned the use of animals in circuses.

Enforcement of the law in Guatemala has been a challenge, so the government has partnered with animal rights groups such as the London-based Animal Defenders International to help.

"These animals have suffered a lifetime of deprivation and abuse," ADI president Jan Creamer said in a statement. The group runs the South Africa sanctuary, which is already home to 26 rescued lions.

The lions and tigers were transported with chartered aircraft to South Africa, arriving Tuesday morning, then were carried to the sanctuary in large trucks.

They were released into their new habitat soon after their arrival. As rain poured down, they calmly walked around their enclosures on the 455-acre (184-hectare) farm, enjoying their first encounter with nature after years of confinement.

According to ADI, the animals were kept at a vehicle scrapyard in Guatemala for years and physically abused to make them submissive.

All have needed veterinary treatment for health issues due to inbreeding, and some needed dental surgery to repair smashed teeth. Some had had their claws and teeth removed. Some have scars from the abuse.

Because of the rough treatment and confinement, the animals will not be released into the wild.

"South Africa obviously has the perfect climate for the lions, and it's an advanced country in that it has good infrastructure, airports and roads so it helps us to manage the animals and to bring them here," Creamer said.