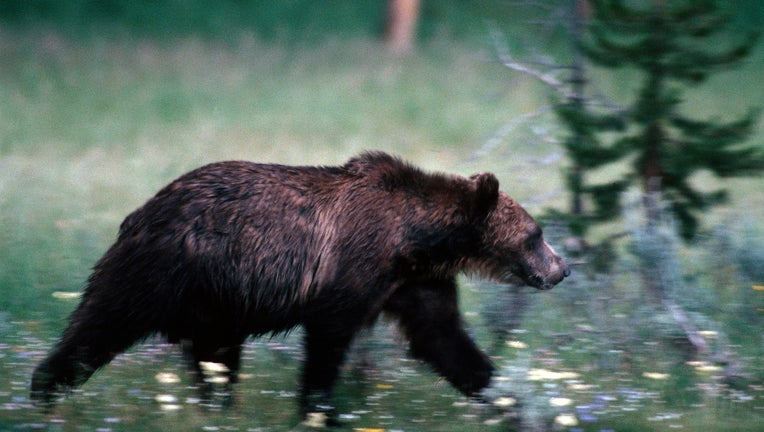 A large old grizzly bear in Yellowstone National Park along the Yellowstone River .As the grizzly population recovers the bears are expanding back into their old habitat outside the park. (Photo by William Campbell/Corbis via Getty Images)

JACKSON, Wyo. - A 34-year-old grizzly bear captured in southwestern Wyoming has been confirmed as the oldest on record in the Yellowstone region, Wyoming wildlife officials said.

Grizzly bear 168 was captured last summer after it preyed on calves in the Upper Green River Basin area.

The male had just a few teeth left and weighed 170 pounds (77 kilograms), just a fraction of the 450 pounds (204 kilograms) the bear weighed as a 5-year-old when he was captured in the Shoshone National Forest in August 1991.

Biologists learned of the bear's longevity after euthanizing the bruin, which had preyed on cattle and then finally, calves. Biologists could tell grizzly 168 was responsible after examining the calves.

"You'll skin them and there's like terrible bruising, but there's no real punctures," Dan Thompson, a biologist with Wyoming Game and Fish told the Jackson Hole News & Guide. "They have so much strength in their jaws they can kill an animal by basically gumming it."

When 168 was captured, it was down to three nubs for canines and no other teeth, making it likely the bear would continue to seek easy prey, such as calves, Thompson said.

The U.S. Fish and Wildlife Service made the call to euthanize the bear last July.

Relocating the animal, even though he had avoided known conflict for decades, "wouldn't have been the right thing to do," Thompson said.

"It was sad that we had to put him down," Thompson said, "but ethically there was nothing else that could be done."

The bear had first been captured as a 3-year-old in 1989 when the inside of its lip was tattooed with the number 168. The bear also was captured north of Dubois in May 1996 and dropped its radio collar the next year.

While the bear's whereabouts in the following years is not known, DNA testing indicates grizzly 168 sired a three-cub litter in 2005 or 2006, Thompson said. There's a "good potential" that he sired another litter in 2009, when he would have been 23.

"It's not 100%, but based on the genetic evidence we have, there's a likelihood that he bred as a 31-year-old male," Thompson said.

Social media resolutions to abide by in 2021

Terrance Chappell, principal of Chappel Communications Group, lays out some helpful resolutions for your social media accounts in the new year.