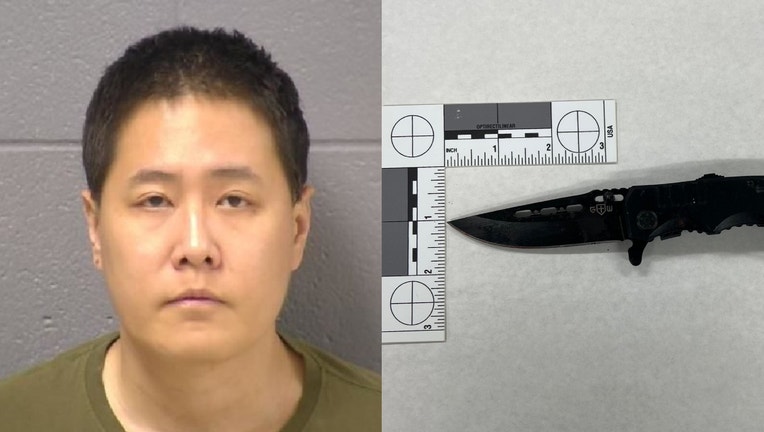 CRETE, Ill. - A Wisconsin man was arrested after allegedly breaking into his soon-to-be ex-wife's parents' house in south suburban Crete and stabbing them multiple times.

At about 6:41 p.m. on Dec. 1, Will County Sheriff's deputies were sent to the 2600 block of Shady Grove Court in Unincorporated Crete for a report of a shooting.

Upon arrival, deputies found three individuals in need of immediate medical attention due to injuries.

A 66-year-old woman and her husband, 68, were both bleeding profusely with multiple injuries.

Additionally, Liu was bleeding heavily. He is the son-in-law of the couple.

All three people were in critical condition and transported to a local area hospital and later to a Chicago area hospital for additional treatment.

A domestic incident sent three people to the hospital in critical condition Thursday night in Will County. Authorities say a man attacked a man and woman in their 60s. The two victims and the attacker were taken to University of Chicago Medical Center with stab wounds and gunshot wounds.

"If it were not for the quick action taken by the deputies on scene, three lives may have been lost that day. Deputies Harris and Swanson, who are in their first year in law enforcement, did an outstanding job at controlling the scene and providing the injured individuals lifesaving aid," said Sheriff Mike Kelley of the Will County Sheriff's Office.

Liu was scheduled to turn himself into custody at the Waukesha County Huber Detention Facility on Sunday for a domestic battery conviction from July 2022 and a violation of an order of protection complaint.

Instead, authorities say Liu allegedly traveled from Wisconsin in an attempt to enact revenge on his soon-to-be ex-wife's parents.

His vehicle was parked down the street from the couple, and allegedly fired several shots in the direction of the couple as they were sitting in the living room, the sheriff's office said. Liu missed all of the shots he fired.

He then allegedly broke into the residence by smashing a sliding glass door, and began firing his weapon inside of the residence several times until the gun malfunctioned.

The 68-year-old man then came to his wife’s defense and was stabbed numerous times in the encounter.

He was able to wrestle Liu down to the ground, and eventually took the knife away, police said. He then defended himself and stabbed Liu 17 times.

The 66-year-old woman has been released from the hospital, and the 68-year-old man is in stable condition recovering from his injuries.

Liu was released from hospital care, and was transported to the Will County Adult Detention Facility, where he is awaiting his initial court appearance.