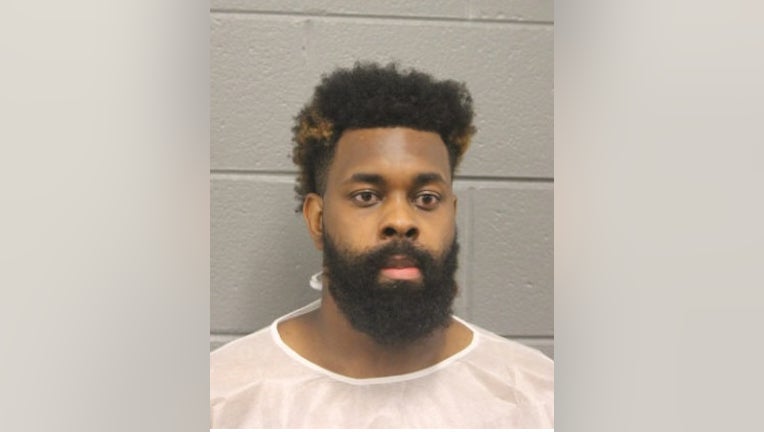 CHICAGO - A Columbia College student was ordered held on $20,000 bail Monday for allegedly hitting a Chicago police officer over the head with a skateboard during Saturday’s protest in the Loop.

Cook County Judge John Lyke Jr. said he didn’t think Jeremey Johnson should be released on his own recognizance due to the “violent nature” of the allegations and said the officer was lucky he only suffered scratches to his arm because he was wearing his helmet.

“Luckily for the officer… he was wearing a protective helmet. It could’ve been very tragic if he was not,” the judge said.

Johnson, 26, was among a group of protesters chanting face-to-face with roughly 15 officers when the crowd “became unruly and several protesters began to tussle with the officers,” Assistant State’s Attorney James Murphy said.

One officer was pulled forward by someone in the crowd, at which point Johnson intentionally swung the skateboard over the officer’s head, striking him three times, Murphy said.

Officers watching real-time surveillance video of the incident, in the 200 block of South LaSalle Street, relayed Johnson’s movements and description to other officers on the street, who arrested him an hour and a half later, Murphy said. Johnson was allegedly still carrying the skateboard but had changed face masks.

Johnson was taken to a hospital for a headache, but was later released into police custody, Murphy said.

Johnson is a Chicago resident, a full-time employee of Second City and a student at Columbia College, his attorney said in court Monday.

Lyke recommended Johnson be placed on electronic monitoring if he is able to post bond. While he will be able to leave his residence for school and work, Lyke told Johnson he cannot skateboard or have a skateboard in his possession while he awaits trial.

3 CHARGED AFTER PROTEST IN THE LOOP

The violent outbreak at Saturday’s protest has been a point of contention between activists and Mayor Lori Lightfoot, who blamed “embedded” agitators for sparking the unrest. Protest organizers accused police of responding too forcefully and striking peaceful protesters who were demonstrating to defund the police and abolish U.S. Immigration and Customs Enforcement.

Johnson is expected back in court on Aug 24.