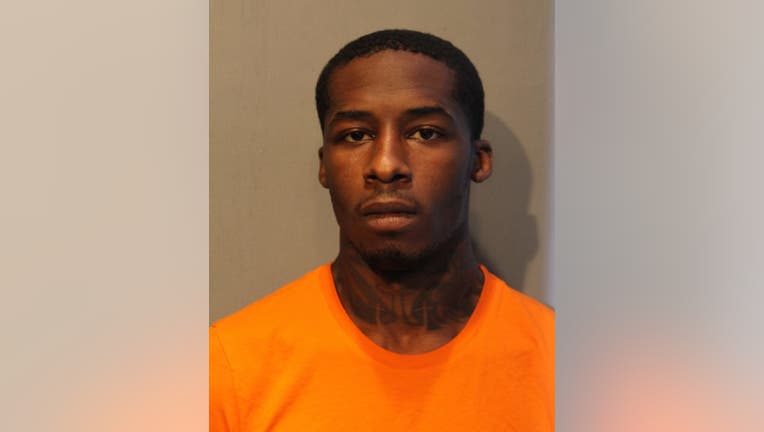 CHICAGO - A man was charged on Sunday with attempting to murder two Chicago police officers.

Police said that Aaron Jenkins, 26, of Calumet City, opened fire on two officers on Sept. 25 in the South Shore neighborhood. One officer was struck and wounded.

Third District officers were responding to a call of shots fired and found two people, 15 and 18, shot on the ground about 10:50 p.m. in the 7200 block of South Jeffery Boulevard.

After the gunman shot the two teenagers, he opened fire again and wounded a Chicago police officer who was applying a tourniquet to one of the young victim’s legs, Cook County prosecutors said Monday.

After Jenkins struck the 30-year-old female officer in both thighs Friday, she got into her police SUV and was driven to a hospital where she told colleagues "I’ll be back soon," prosecutors said.

One of Jenkins’ teenage victims, an 18-year-old, died. The younger victim, 16, was on a ventilator in critical condition, authorities said.

After the shooting, Jenkins went on to barricade himself in a nearby home in an hours-long standoff with police, prosecutors said. He surrendered on Saturday.

The initial shooting broke out after Jenkins and his girlfriend walked up to the back porch at his sister’s house in the 7200 block of South Jeffery Boulevard, prosecutors said. There, surveillance cameras captured the two teenagers come up from under the porch, prosecutors said. Jenkins had a brief interaction with pair before he allegedly opened fire.

The two teens retreated but then the older teen, who was hit several times, returned fire from the middle of the street, prosecutors said. That teen, who suffered gunshot wounds to the neck and shoulder, ran to an alley and collapsed, prosecutors said. Police later found a fully-loaded handgun discarded in a nearby brush pile.

The officer, who was later wounded, and her partner drove toward the scene after they heard the gunfire while on patrol a block away, prosecutors said.

Shell casings and a fired gun were found in the street near the younger teen, who had been shot in the hip and chest, prosecutors said.

Jenkins was ordered held without bail Monday for attempted murder of a police officer and aggravated battery with a firearm.

A spokeswoman with the state’s attorney’s office wouldn’t say whether Jenkins would be charged with the older teenager’s murder.