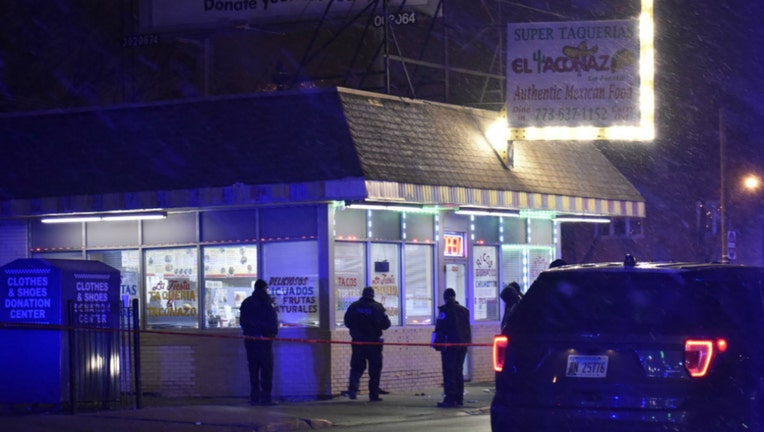 Police investigate the scene where a man was fatally shot at a restaurant in Montclare Jan. 4, 2020. | Carly Behm/Sun-Times

CHICAGO - A 49-year-old man was shot and killed by a security guard at a restaurant Saturday in Montclare on the Northwest Side.

The guard shot Roberto Gonzales during an “armed confrontation” at 1:47 a.m. at a restaurant in the 7100 block of West Diversey Avenue, Chicago police and the Cook County medical examiner’s office said.

He was taken to Loyola University Medical Center in Maywood, where he was pronounced dead, authorities said.

An autopsy determined that Gonzales died of a gunshot wound to the neck and ruled his death a homicide, the medical examiner’s office said.

Under a light snowfall, evidence markers, gloves and hats were scattered near the entrance of the restaurant. Blood could be seen on the sidewalk outside as police examined a red vehicle by the door.

The guard was questioned by police and was later released without being charged, police said. The circumstances of the shooting remain under investigation.

In May 2017, a man was fatally shot and another was wounded during an armed robbery at the same restaurant.