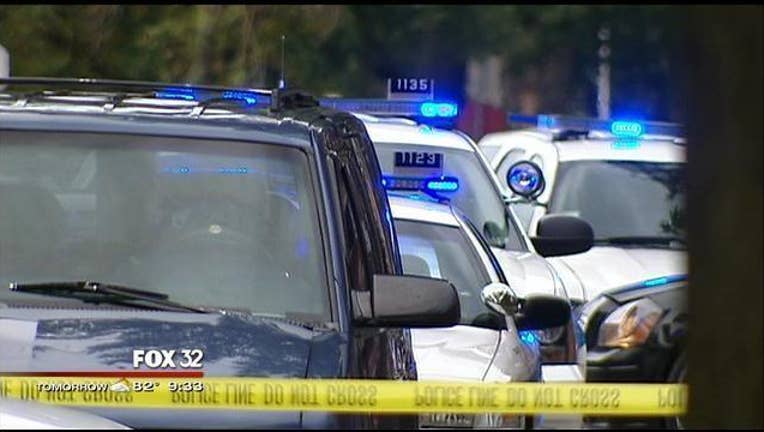 CHICAGO (Sun Times Media Wire) - A man was killed and at least 12 other people were wounded — two of them critically — in shootings across Chicago on Thursday.

The homicide happened shortly after 1 a.m. in Logan Square on the Northwest Side.

Isaac Acevedo Jr., 23, was sitting in a vehicle near Schubert and Central Park when another vehicle pulled alongside and someone inside fired shots at him, according to Chicago Police and the Cook County medical examiner’s office.

Acevedo, of the 1400 block of North Lorel, was shot in the chest and taken to Advocate Illinois Masonic Medical Center, where he was pronounced dead at 2:49 a.m., authorities said.

Most recently, a 19-year-old man was shot in the Austin neighborhood.

About 11:45 p.m., the man was standing outside in the 4800 block of West Jackson when someone in a passing white vehicle shot him in the chest, police said. He was taken to Stroger Hospital in critical condition.

Five minutes earlier, a 17-year-old boy was standing on the corner in the 6600 block of South Lowe when an unknown male opened fire at him, striking him in the mouth, police said. He was taken to Stroger Hospital, where his condition had stabilized.

About the same time, a 22-year-old man was on a porch in the 9500 block of South Woodlawn when he was shot in the leg, police said. He was taken to Advocate Christ Medical Center in Oak Lawn, where he was listed in good condition.

About 10 p.m. two people were shot during a robbery attempt in Englewood.

A 24-year-old man was walking with a woman in the 7400 block of South Morgan when two other people walked up with a gun and announced a robbery, police said.

The 24-year-old, a concealed carry permit holder, pulled out a gun, as did one of the attempted robbers, a 17-year-old boy, police said.

They opened fire on each other, with the teen shot in the chest and the man in the leg, police said. Both were taken to Advocate Christ Medical Center in Oak Lawn, where the teen was listed in critical condition. The man’s condition stabilized.

Thursday evening, a 17-year-old boy was shot in the back in West Englewood on the South Side.

The shooting happened about 5:30 p.m. in the 6800 block of South Justine, and he was taken to Advocate Christ Medical Center in Oak Lawn in critical condition. The boy has documented gang ties, but police did not have additional details on the attack.

Earlier Thursday afternoon, a 25-year-old man was shot and critically wounded in Austin on the West Side.

About 2:15 p.m., he was in the 4900 block of West Crystal when several people on bicycles rode up to him and one of them shot him in the chest. Someone drove him to West Suburban Medical Center in Oak Park and he later was transferred to Stroger Hospital in “critical but stable” condition, police said.

The man is a documented gang member, a police source said.

About 20 minutes earlier, two men were shot in West Town.

The men, ages 24 and 25, were in the 900 block of North Winchester about 1:55 p.m. when the older man was shot in the side and the younger in the arm. They took themselves to Northwestern Memorial Hospital, where both of their conditions were stabilized, according to police, who said the attack might have stemmed from a dispute over drugs.

In the morning, a 25-year-old man was wounded in another West Englewood attack. The shooting happened about 10:10 a.m. in the 6200 block of South Marshfield. He was treated at the scene, but police did not have additional information.

Early Thursday, a bullet grazed a 17-year-old boy’s head in an Avondale neighborhood drive-by shooting. It happened about 1:10 a.m. when he was standing on a corner in the 3000 block of North California and someone fired shots from a passing white SUV, police said. His condition was stabilized at Norwegian American Hospital.

The day’s first shooting happened just after midnight on the Near West Side. A man in his 30s walked into University of Illinois Hospital with gunshot wounds to the leg and back, police said. He told authorities he had been shot at 13th and Throop and later was transferred to Stroger Hospital in good condition.