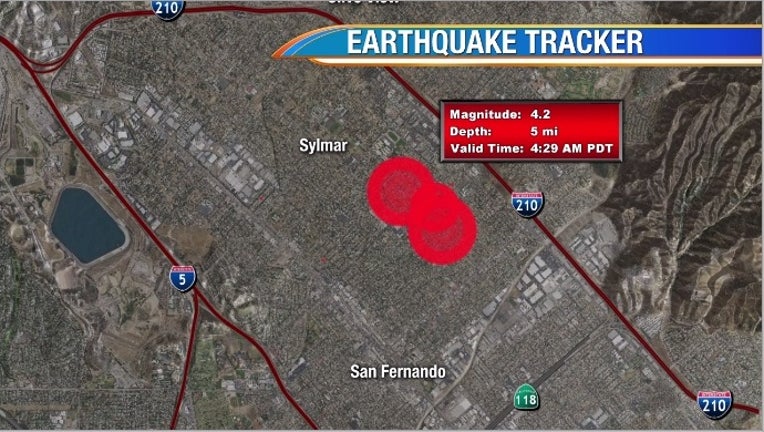 LOS ANGELES - Many Southern California residents were woken up by a jolt early Thursday morning as a preliminary 4.2-magnitude earthquake struck the San Fernando Valley followed by a series of aftershocks, the U.S. Geological Survey said.

The quake was reported at 4:29 a.m. with an epicenter about a mile north of Pacoima and a reported depth of about 5 miles.

"When I woke up, I just felt my bed shaking…it was pretty abnormal just to feel it out of nowhere," a resident told FOX 11.

“Everybody was up and running in the house” said one San Fernando resident.

Aftershocks with recorded magnitudes of 3.8, 2.5, 3.1, 2.7 were just some of the many that struck the same area Thursday morning.

Many in the area say they got a few seconds warning before the earthquake hit thanks to the statewide early warning system app on their phones. The app is set to alert people if a 4.5 earthquake or higher hits the area.

FOX 11's Bob DeCastro spoke with Pacoima residents after a 4.2-magnitude earthquake struck the area and was felt across Southern California.

RELATED: Are you prepared for an earthquake?

There were no immediate reports of damage or injuries as confirmed by Los Angeles Mayor Eric Garcetti.

While there are many variables involved, geologists say damage does not usually occur until the earthquake magnitude reaches somewhere above 4 or 5.

RELATED: Quakes push Californians to prepare for the next big jolt