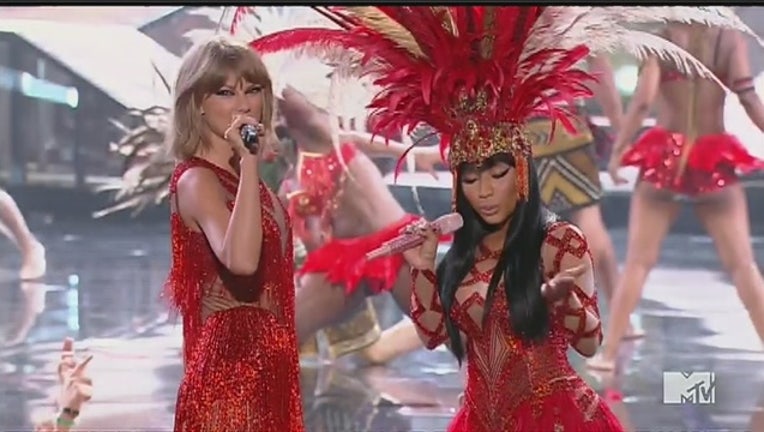 LOS ANGELES, Calif (FOX 11 / AP) - The MTV Video Music Awards are as much about the performances as the memorable moments. A few of the top moments in the 2015 VMAs:

Kanye West received the Michael Jackson Video Vanguard Award for his memorable music videos and live performances over the years, but it was his penchant for unscripted speeches that added to the anticipation.

During a rambling speech, he said he got high before getting on stage, sort of apologized to Taylor Swift for interrupting her acceptance speech in 2009, explained how his daughter North West has changed him, ranted against MTV and announced that he planned to run for president in 2020.

Taylor Swift and Nicki Minaj exchanged tense tweets prior to the Sunday night's awards, but they teamed up for a showing-opening duet that ended with a hug. The genuine moment at the top of the show drove home the point that female friends were worth more than any trophy.

But Nicki and Miley Cyrus aren't done yet.

After winning best hip-hop video for "Anaconda," Minaj called out this year's host for criticizing her in a recent New York Times interview. Cyrus retorted that she lost a VMA in 2008 and she persevered.

The only thing we knew for sure when the moment ended: Minaj also wins this year's award for throwing shade.

Justin Bieber returned to the VMA stage with a high-flying performance of his new single, "What Do You Mean?" In a spoken word voiceover, the young singer talked about his journey and came swinging out of the rafters. After the performance, Bieber was overcome by emotion and fan reaction.

For all the hype leading up to Cyrus' hosting gig, the foul-mouthed, nearly always close-to-naked singer did not disappoint those expecting her to both shock and amuse. Her wildly colorful outfits throughout the show ranged from see-through to barely covering her body. And then there was ...