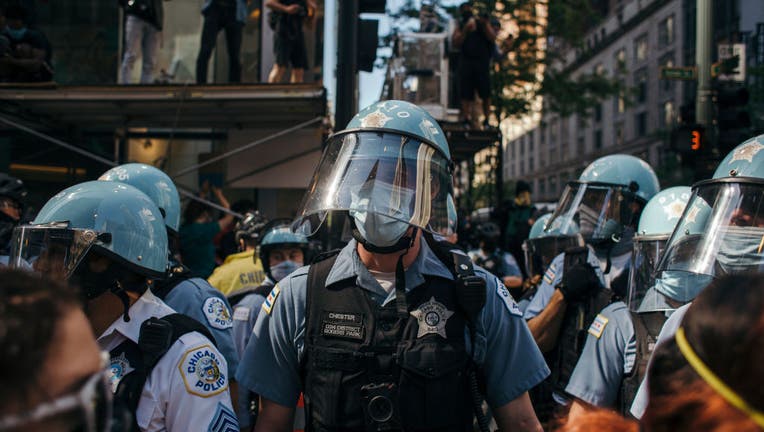 Police officers blocked protesters from joining together at various check points, on May 30, 2020 during a protest against the death of George Floyd, an unarmed black man who died while while being arrested and pinned to the ground by the knee of a M

CHICAGO - The National Guard will be in Chicago to support the police department and to protect citizens and their First Amendment rights, the leader of the Illinois Guard said Sunday, in the wake of protests over the Minneapolis police killing of George Floyd.

"I want to clear and emphasize that the Guard is here to support our police department. They are here as needed support," Mayor Lori Lightfoot said on Sunday afternoon.

In this video from The TRiiBE reporter Matt Harvey, protesters tried to overturn a Chicago police vehicle. Several vehicles were damaged during Saturday's protest.

The city is also under a 9 p.m. to 6 a.m. curfew. And, on Sunday night, the CTA announced that all train and bus service would be suspended at 6:30 p.m. until Monday morning. Metra announced late Sunday that Monday's train service was completely canceled.

Lightfoot and Pritzker said they support the rights of people to protest and speak up in a nonviolent way. But some protesters vandalized property, lit cars on fire, and looted buildings. Police used batons to beat back demonstrators as police cars were set ablaze and windows were smashed at businesses including neighborhood convenience stores and high-end Michigan Avenue shops. At least four people were shot, one fatally, amid the chaos. A 26-year-old man died after he was shot by a suspect who got out of a car.

"But we also have an obligation when there are elements among the protesters who do not have respect for peaceful, nonviolent protest but who bring shovels, hammers, bottles of urine, accelerants, we have an obligation to protect life, liberty and property," Lightfoot said.

Lightfoot said the people who brought weapons behaved in a way that was choreographed and planned ahead. She said that CPD is working with the FBI and ATF to identify those people.

"Someone driving up with a UHaul, breaking windows and hauling out merchandise in coordination," Lightfoot said. "There were clearly efforts made to subvert the peaceful protest and turn it into something else. Make no mistake, this was an organized effort last night."

Several police cars were damaged, including at least one set on fire, as protests continued Saturday over the death of George Floyd.

Lightfoot and Gov. JB Pritzker noted that for most of the day, most of the people protested peacefully.

"For most of the day yesterday, the protests in Chicago were beautiful massive and peaceful. But late in the evening, the protest became about violence and damage and that changes the conversation away from the terrible acts that took George Floyd's life, away from the insiduous racism that we all have a role in addressing," Pritzker said Sunday.

Protests in Chicago over death of George Floyd

Hundreds of people gathered in Chicago Saturday to demand justice in the Floyd George case.

"I also have an obligation to keep people safe. We have never curtailed people's right to peacefully express themselves," Pritzker said.

But he noted that the coronavirus spreads easily in groups and that it is possible it was spreading among the protesters in Chicago on Saturday.

"It's not lost on me that the peaceful protesters who have been out the last few days weighed the risks of the pandemic against coming out to speak the truth. I see you. I hear you. I understand why you made the choice you made," Pritzker said.

Pritzker encouarge the protesters to isolate thsemves in case they were exposed and to seek testing if they start exhibiting symptoms.

"We are still on track for reopening on Wednesday," Lightfoot said, though she said she was concerned that people were spreading coronavirus in the large crowds.

Lightfoot also expressed sadness for the business owners who had been working towards reopening their stores and restaurants, only to see their property damaged.

CTA bus and train service in and out of the Loop has been suspended. For more updates, visit transitchicago.com.

This video from Saturday's protests in Chicago shows a Chicago police officer being hit, and then other protesters gathering around in a protective gesture.