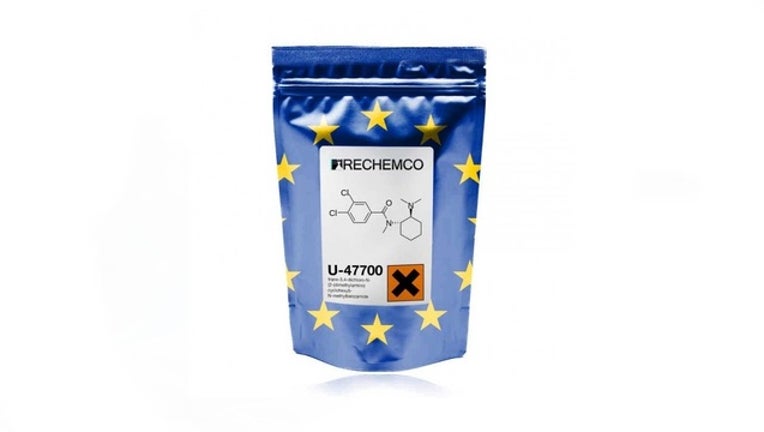 KANSAS CITY, Mo. (AP) -- A new synthetic drug that can be purchased online and is connected to at least 50 deaths nationwide has several states scrambling to stop its spread, with Kansas law enforcement agencies seeking an emergency ban.

At least three other states - Ohio, Wyoming and Georgia - already have taken action to ban U-47700 after it was connected to overdoses. A spokeswoman for the U.S. Drug Enforcement Administration said that the agency is studying the opioid but hasn't yet moved to control it.

Nearly eight times more potent than morphine, U-47700 comes in various forms and can be injected, snorted or taken orally.

Synthetic drugs are comprised of man-made chemicals and produced in a laboratory, while organic drugs are made with ingredients found in nature, DEA agent Melvin Patterson said.

Considered by public health officials as "new psychoactive substances," synthetic marijuana and bath salts, a stimulant, started showing up in the U.S. around 2008 but were banned a few years later by the DEA because of serious health issues attributed to them.

Synthetic opioids like U-47700 comprise one of four categories of the new fake drugs, along with synthetic marijuana (K2), stimulants (bath salts) and hallucinogens. Each category mimics the effects of their organic drug counterparts, DEA spokeswoman Barbara Carreno said.

Johnson County, Kansas, District Attorney Steve Howe said two deaths in his county have been connected to U-47700, while a handful of overdose deaths elsewhere in the state also might be linked. Howe declined to provide any details about the deaths.

It's hard to get a firm count on fatal overdoses because the drug is new and doesn't always show up on initial post-mortem examinations, Howe said. It's most likely to be found during an autopsy drug screen.

"The sense we get is that this drug is even more dangerous than other synthetic drugs we've seen across our desk," Howe said.

Even so, it could take until August before it's banned in Kansas because of the steps necessary to get it designated a Schedule I controlled substance. That designation would make it illegal to possess, sell or distribute the compound, which has no street name and goes for about $40 a gram online.

The U in the name stands for Upjohn, a pharmaceutical manufacturer that developed the drug in the mid-1970s as scientists were looking for a synthetic alternative to morphine, said Barry Logan, chief of forensic toxicology at NMS Labs in Willow Grove, Pennsylvania, which provides lab services for government and private clients.

"They were searching for a novel painkilling drug, the holy grail of analgesics that didn't have the addictive or respiratory depression properties of opiates or heroin," said Logan, who recently spoke about synthetic opioids at an international conference in Budapest.

The Upjohn researchers devised and patented several different compounds in search of their super drug, Logan said. Some of the compounds were written about in scientific literature, including methods for making them.

Chemists in China and Eastern Europe can find recipes for many of the drugs - including U-47700 - by combing through online patent records and old scientific journals, he said.

NMS has identified about 50 deaths across the U.S. that can be connected to U-47700, which came onto the company's radar screen in December, Logan said.

Carreno said the DEA is struggling to keep up with all of the new compounds being created in labs. DEA forensic chemists have identified 300 to 400 of those chemicals, but the agency has controlled only two or three dozen, she said.

U-47700 is produced by chemical companies in China, which last year banned 116 new psychoactive substances at the urging of the U.S.

"Chemical companies are making new ones to replace them," Carreno said. "Somebody pulled this one off a shelf."