Like schools, hospitals in New York are also getting ready for a potential labor shortage as the state's vaccine mandate deadline draws closer.

Hochul issued a statement on Saturday that said she is prepared to declare a state of emergency to sure up staffing at medical facilities should unvaccinated workers fail to comply with the mandate.

The workforce would be supplemented by health care workers who are licensed to practice in other states or countries, recent graduates and retired professionals. Hochel said her office would collaborate with federal officials and other states to find ways to expedite visa requests for medical workers.

Another option would be to deploy medically trained National Guard members and deployment of Disaster Medical Assistance Teams (DMATs) to assist local health and medical systems.

"We are still in a battle against COVID to protect our loved ones, and we need to fight with every tool at our disposal," Hochul said. "I am monitoring the staffing situation closely, and we have a plan to increase our health care workforce and help alleviate the burdens on our hospitals and other health care facilities."

Last month, New York’s health department issued an order for all health care workers to be vaccinated by Sept. 27. It expanded an earlier mandate that only applied to state health care professionals.

RELATED: History of vaccine mandates in the United States

Those who fail to adhere to the mandate face losing their job, and they might not find relief through unemployment.

The Department of Labor has determined workers who are terminated because of vaccine refusal are ineligible for unemployment insurance unless they present a valid doctor-approved request for medical accommodation.

According to FOX5 New York, unions and administrators have asked the state to delay the mandates, but the governor has shown no sign of slowing down.

The topic of vaccine mandates has been polarizing, typically splitting Americans along party lines. But numerous surveys have shown a majority of Americans support such mandates.

According to a FOX News poll released last Sunday, 58% of respondents support vaccine mandates for the federal government and 55% support them for business employees.

An August poll conducted by the Associated Press-NORC Center for Public Affairs Research revealed the majority of American adults want vaccine mandates for those attending movies, sports, concerts and other crowded events; those traveling by airplane; and workers in hospitals, restaurants, stores and government offices.

Close to 6 in 10 Americans say they favor requiring people to be fully vaccinated against COVID-19 to travel on an airplane or attend crowded public events. Only about a quarter of Americans oppose such measures. 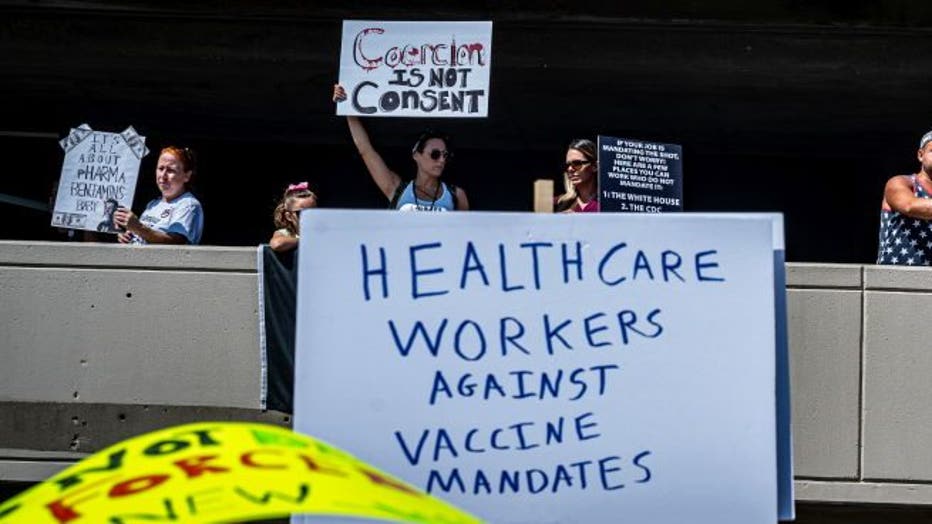 Roughly 6 in 10 also support vaccine mandates for hospital or other health care workers, along with government employees, members of the military and workers who interact with the public, such as in restaurants and stores.

Support is slightly lower for requiring vaccinations to go out to a bar or restaurant, though more are in favor than opposed, 51% to 28%.