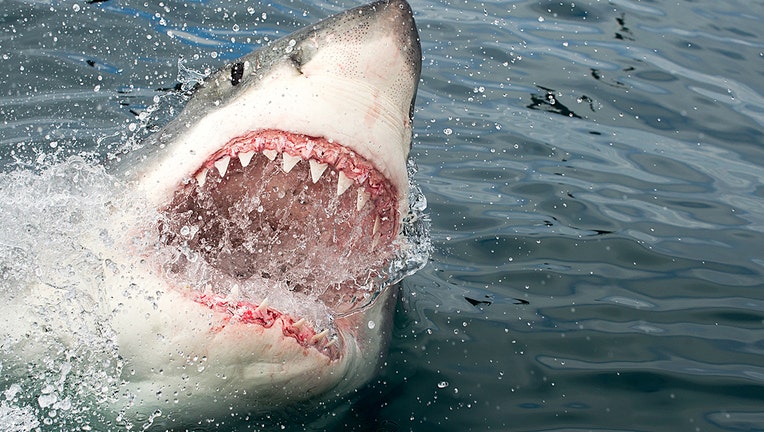 NEW ZEALAND - This surfer knew he had to fight for his life.

A 60-year-old man in New Zealand fought back against a great white shark on Saturday after he was attacked at Pauanui Beach, located in the country's Coromandel region.

Nick Minogue from Auckland told the New Zealand Herald he was paddling out in the water around 11:30 a.m. when he saw a nearly nine-foot shark that bit his arm and latched onto his surfboard.

"By the time I realized what was going on its teeth were definitely latched on to the front section of the board," he told the Herald.

After remembering that he heard sharks don't like it if you punch them in the nose or eye, Minogue said he then took aim at his attacker.

"So I actually shouted at it 'f--- off!' and went to punch it in the eye and missed," he told the Herald' "Then I pulled my fist back and shouted 'f--- off!' again and got it right smack bang in the eye."

The 60-year-old said that in between the two punches, the shark "crunched down" on his board before disengaging and letting go, brushing him with its dorsal and tail fin as it swam away. After the incident, Minogue said he paddled back to shore along with another German surfer who was about 160 feet away from him when the attack took place.

MORE NEWS: Unprovoked shark attacks drop worldwide, but not in the US

"The German guy was kind of screaming the whole way which probably made me paddle even faster," he told the Herald.

Experts in New Zealand told the newspaper that a review of photos taken by the man of the bite to the board, in addition to his description of the shark, matches that of a great white.

Other than a cut on his arm, Minogue said that his full-length wetsuit saved him from any additional injury.

"There was blood dripping out the sleeve of my wetsuit. Thankfully it wasn't too deep," he told the Herald. "Two teeth put holes in my wetsuit but only one punctured the skin."

Others have survived shark attacks in recent years after fighting back against the predator.

In 2018, William Lytton, 61, of Scarsdale, N.Y., told The Associated Press he was swimming a few yards from the shore at Long Nook Beach in Truro, Mass. when a shark bit down on his leg. The 61-year-old said he smacked the shark's gills with his left hand, which resulted in three torn tendons.

Lytton told the AP he must have recalled from nature documentaries that the gills were one of the most vulnerable parts of the shark.

Last year, Charlie Winter saved his 17-year-old daughter, who was attacked by a shark at Atlantic Beach in North Carolina, after punching the predator in the face.

"It was a big shark ... I immediately started to hit it," he said at a press conference after the attack. "I don't know how many times I punched it, but I hit it with everything I could and it let go."

Fox News' Madeline Farber and The Associated Press contributed to this report.