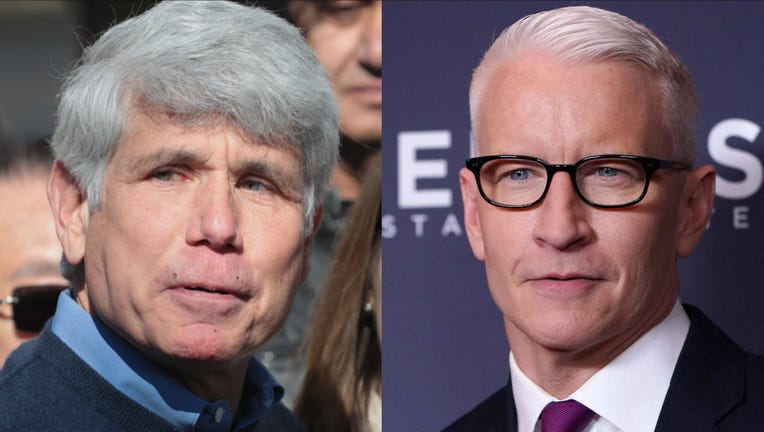 Their frustration with one another appeared to reach a boiling point, with Cooper accusing Blagojevich on air of spouting "bulls---," and Blagojevich using the same profane term in his reply.

CNN did not bleep the remarks.

During their discussion, Blagojevich continued to maintain his innocence regarding the corruption charges on which he was convicted, telling Cooper he was a "political prisoner" of an unjust criminal justice system -- until President Trump commuted his sentence this week, freeing Blagojevich from prison.

The CNN host balked at the claim, accusing Blagojevich of essentially comparing himself to Nelson Mandela -- the late South African leader who was long imprisoned because of a racist apartheid system.

"I bet if you were to ask Nelson Mandela whether he thought it was fair in the early ‘60s in South Africa he would say what I'm saying today," Blagojevich fired back.

Cooper interjected: "I've just got to stop you. As someone who worked in South  Africa and saw apartheid, the idea that you are comparing yourself to somebody who has actually been railroaded by an apartheid system is just nuts and, frankly offensive."

Blagojevich reminded Cooper that it was he, not Blagojevich, who brought Mandela's name into the conversation.

Blagojevich then told Cooper a more apt comparison would be to U.S. Sen. Robert Menendez, D-N.J., whose own federal corruption case was thrown out by a Newark federal judge in 2018. The U.S. Justice Department ultimately opted against retrying the Menendez case.

"What I’m saying is, I was thrown in prison and spent nearly eight years in prison for practicing politics -- for seeking campaign contributions without a quid pro quo. No express quid pro quo -- and I was given the same standards Senator Menendez was given," Blagojevich said. "I could very well have been in the U.S. Senate instead of where I was."

Full Interview: Rod Blagojevich sits down with FOX 32 to talk about his time in prison, what’s next

Blagojevich repeated his claim that he was the victim of corrupt federal prosecutors with "uncontrolled" power, and began to invoke chief prosecutor Patrick J. Fitzgerald before Cooper cut him off to ask about a previous remark.

Cooper said Blagojevich was not only convicted by a jury of Illinoians but had his case upheld by a circuit court and denied a hearing by the Supreme Court.

"Your argument doesn't hold up," he said.

Later in the interview, when Blagojevich defended his "requests for campaign contributions," a bemused Cooper interjected "extorting a children's hospital." Blagojevich again went on defense, saying there was no "quid pro quo" in that situation.

Cooper later claimed Blagojevich was engaging in the usage of a "whole new alternate universe of facts" and failing to admit guilt.

"That may be big in politics today but it’s still frankly just bulls---," Cooper said.