BROOKLYN CENTER, Minn. (FOX 9) - A man died Sunday after he was shot by police and then shortly after involved in a vehicle crash in Brooklyn Center, the police department reports. Law enforcement did not confirm the victim's identity Sunday, but protesters were calling for justice in the death of a man named Daunte Wright during demonstrations.

Upon learning of the death, protesters gathered at the scene before moving to Brooklyn Center's Police Headquarters where they faced tear gas and flash bangs from law enforcement seeking to control the crowd. After midnight, Mayor Mike Elliot announced a 1 a.m. to 6 a.m. Monday curfew in the city.

Man dies after being shot by police in Brooklyn Center; protests ensue across city

A man died Sunday after he was shot by police and then shortly after involved in a vehicle crash in Brooklyn Center, the police department reports.

In an early morning news conference Monday, Department of Public Safety Commissioner John Harrington said the Minnesota National Guard has been full activated and mobilized in the Twin Cities metro area. He said the Guard's presence will be "robust" over the next "two or three days."

Department of Public Safety Commissioner John Harrington and representatives from the State Patrol and Hennepin County gave an early morning update after a night of unrest in Brooklyn Center and into Minneapolis following a deadly police shooting.

Police say the situation started just before 2 p.m. when officers tried to stop a vehicle for a traffic violation on the 6300 block of Orchard Avenue. During the stop, police say they learned the driver had an outstanding warrant and attempted to take him into custody, but the man got back into the vehicle.

As the man got back into the vehicle, police say an officer fired their gun, hitting the driver. It's unclear why the officer fired shots.

Police in riot gear were seen in a Brooklyn Center neighborhood, where protesters gathered after a person was shot and killed by police Sunday.

Despite being hit, police say the man was able to drive several blocks away before hitting another vehicle. Police say they attempted to revive the driver who was shot, but he died at the scene. A passenger in the other vehicle was transported to the hospital for treatment but is expected to survive.

The BCA is now investigating the shooting. Brooklyn Center police say officers were wearing cameras that appear to have been active during the incident. 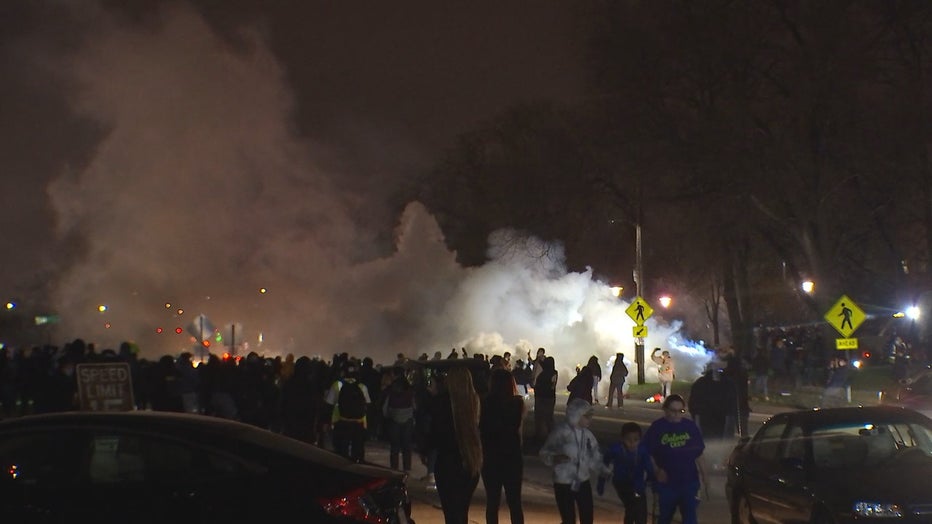 Tear gas billows near the Brooklyn Center Police Department after Sunday's shooting by an officer.

After the shooting, a tense situation developed near the shooting scene. Over the course of the afternoon, a large crowd of about 100 people - including family members of the person who was shot - gathered.

Protesters move to the police department

As police left the scene of Sunday's shooting around 8 p.m., protesters followed officers, moving from the area of 63rd Avenue North and Kathrene Drive to the Brooklyn Center Police Department on North Humboldt Avenue.

At the department, a group of people gathered on Humboldt and used garbage cans and other objects to create a makeshift barricade. Vehicles also blocked traffic as protesters gathered in the roadway to call for justice in the shooting.

After a police shooting left a man dead in Brooklyn Center Sunday afternoon, protesters descended on the city to make their voices heard. Police were seen using tear gas and flash bangs to disperse the growing crowds into the night Sunday.

Initially, no police were seen around the building. However, around 9 p.m., as some protesters move towards the police building, officers in riot gear pulled up and began encircling the building. 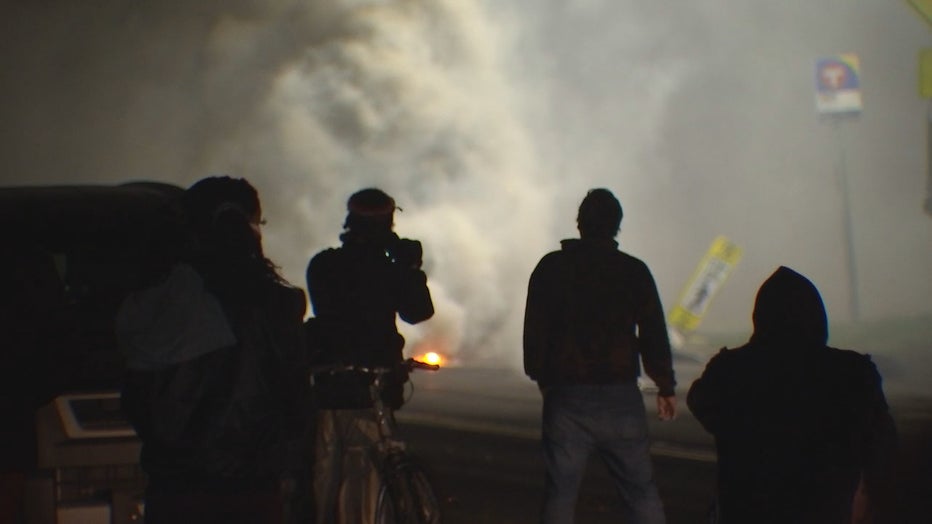 Protesters stand as police fire tear gas along Humboldt Avenue in Brooklyn Center, in front of the city's police department.

In statements to Twitter Sunday, the Mayor of Brooklyn Center and the Governor of Minnesota both addressed the shooting.

In a tweet, Gov. Tim Walz said he is "closely monitoring" the situation and said he and his wife are "praying for Daunte Wright's family as our state mourns another life of a Black man taken by law enforcement."

Mayor Mike Elliot called the shooting "tragic" and urged protesters to be peaceful in the aftermath. He also called on police to not use force against peaceful protesters.

The American Civil Liberties Union also issued a statement about the Brooklyn Center shooting Sunday, calling the details of the incident "troubling."

"The ACLU of Minnesota calls for an immediate, transparent and independent investigation by an outside agency other than the Brooklyn Center Police or the BCA, and for the quick release of any bodycam footage. We call for the naming of all officers and agencies involved."

In reaction to the protests following the shooting, Metro Transit suspended serivce to and from the Brooklyn Center Transit Center Sunday night.

Just after 10:30 p.m. Sunday night, Brooklyn Center Schools announced it would close all of its buildilngs Monday, April 12 and have school remotely instead.

"We are focused on taking steps in the moment," said Superintendent Dr. Carly Baker. "I haven’t entirely processed the tragedy that took place in our community and I’m prioritizing the safety and wellbeing of our students, families, staff members and community members."

Baker then said, "Tomorrow, our staff will be focused on the needs of our students. We know our community experienced trauma and we need the time and space to process."

In addition to the unrest in Brooklyn Center following the deadly police shooting, police in Brooklyn Park told FOX 9 the police headquarters in the neighboring city was "shot up" around 8 p.m. Sunday.

Police said nobody was injured in the shooting, but that multiple rounds were shot through the department's glass front doors. Some rounds reached the lobby.