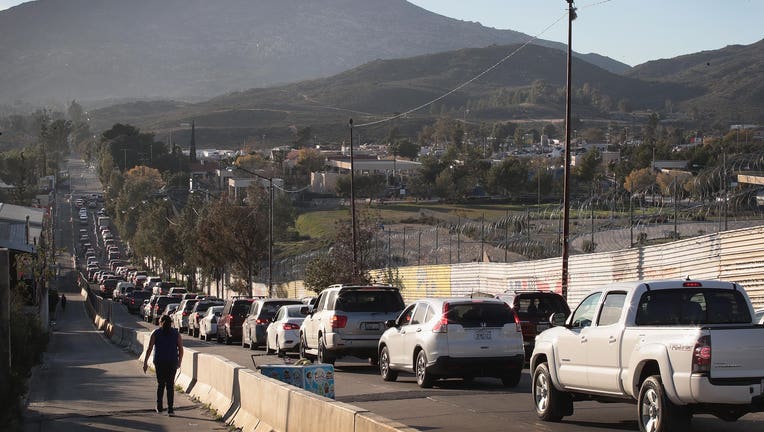 TACATE, MEXICO - JANUARY 27: Motorists heading to the United States from Mexico wait along U.S. border wall to pass through the port of entry on January 27, 2019 in Tecate, Mexico. The U.S. government had been partially shut down as President Donald

SAN DIEGO (AP) - Three women died and two other people were detained after federal agents were called to rescue a group who had crossed the border from Mexico illegally and got lost in frigid weather near a Southern California mountain, U.S. Customs and Border Patrol said.

Authorities responded around 2:15 p.m. Monday following a report of five people in need of medical attention in rugged terrain just south of Mount Laguna in San Diego County, CBP said. The area is about 15 miles (24 kilometers) north of the U.S.-Mexico border.

Two of the five people met agents upon arrival and told them three others needed help, KNSD-TV in San Diego reported Tuesday.

The remaining three were located around 5 p.m. Just after 10 p.m., Border Patrol agent Theron Francisco confirmed that they had died, the news station reported.

Due to severe weather, CBP was unable to reach their bodies, which were expected to be recovered on Tuesday, weather permitting. Several inches of snow fell Monday on Mount Laguna.

The group called 911 when some of their members began suffering from hypothermia, officials said.