A timelapse taken from the summit of Oregon’s Black Crater volcano captured the Perseids meteor shower on August 7.

The Orionid meteor shower, which peaks in mid-October, is usually considered to be one of the most beautiful showers of the year — but 2021 may not be the best cosmic show.

The Orionids are expected to be active from Oct. 2 to Nov. 7, 2021, with a peak early in the morning of Thursday, Oct. 21. This will also coincide with the illumination of a full moon, making it more difficult to see the meteor shower.

Stargazers in both the Northern and Southern Hemispheres can expect to see rates of up to 20 meteors per hour, according to Space.com. But this will only occur under the best conditions and away from city lights.

Orionid Meteor Trails Over Midwest Sky Ahead of Shower's Peak

"The Orionids are going to, frankly, suck this year ... the moon will be up all night, from sunset to sunrise," NASA meteor expert Bill Cooke told the outlet.

The Orionid meteors appear every year around this time when Earth travels through an area of space littered with debris from the famous Halley’s Comet, according to NASA. The meteors are known for their brightness and speed, traveling into the Earth's atmosphere at about 148,000 mph. 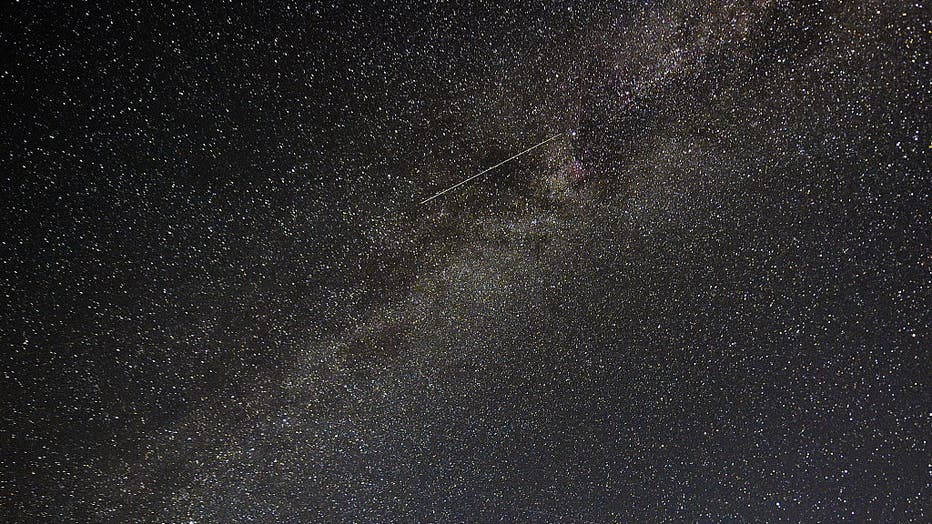 FILE IMAGE - A meteor streaks across the Milky Way during the Orionid meteor shower on Oct. 23, 2016, in Russia. (Photo by Yuri SmityukTASS via Getty Images)

Fast meteors can leave glowing "trains," or incandescent bits of debris in their wake, which last for several seconds to minutes. Some can also become "fireballs," or prolonged explosions of light, NASA says.

The best way to view the Orionids is in an area well away from light pollution. The space agency suggests lying on the ground with feet facing southeast for those in the Northern Hemisphere.

"In less than 30 minutes in the dark, your eyes will adapt and you will begin to see meteors. Be patient — the show will last until dawn, so you have plenty of time to catch a glimpse," NASA says.

RELATED: Hunter’s Moon 2021: When to see the full moon in October

The Hunter’s Moon reaches peak illumination at 10:57 a.m. ET on Oct. 20, according to the Farmer’s Almanac. But it’ll be below the horizon, so skywatchers will have to wait until sunset to see the moon in all of its glory.