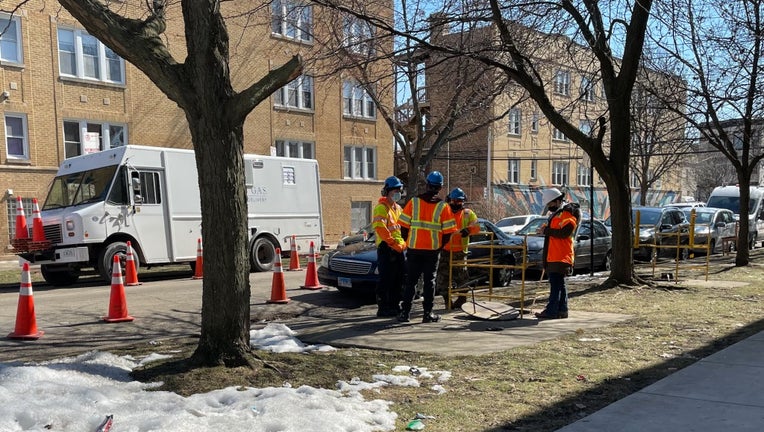 CHICAGO - More than a thousand Peoples Gas customers in Logan Square were without heat for a second day Wednesday as the utility company said service could be restored by that evening.

The outage, which began by 2 p.m. Tuesday, affected about 1,300 customers in the area south of Belden Avenue, north of Armitage Avenue, west of Hamlin Avenue and east of Kedzie Avenue, according to Peoples Gas spokesman David Schwartz.

Crews expected to return gas to the main lines by noon Wednesday, but the process of restoring service to each household, which includes restarting pilot lights, could take into Wednesday evening, he said.

Schwartz wouldn’t specify the cause of the disruption, but said it affected nearly half of the people living within the boundary.

Charles Williams, who lives in the 3400 block of West Shakespeare Avenue, said his family noticed the heat was out late Tuesday morning, and spent several hours checking with the landlord if the furnace was broken.

"I wasn’t necessarily upset, but they could’ve told us earlier," Williams said. "That would’ve been cool if they told us we had an outage, but it was at the end of the day after we talked with our landlord. That would’ve saved some time."

Peoples Gas spokeswoman Danisha Hall said this service disruption was a "tricker one" because it involved shutting down service at individual properties. Another issue was that many gas meters were located inside buildings, she said.

Restoring gas service will also be labor intensive, since gas crews need to physically enter homes and require an adult to be present in the home, Hall said.

Peoples Gas has spent years replacing leak-prone cast-iron pipes and modernizing its system in a program that saw its cost balloon by billions of dollars, the Chicago Sun-Times has reported. The average Peoples Gas customer paid $131 last year on top of their monthly bill for the pipe-replacement work, but a consumer group has said it is concerned the surcharge will continue to rise.

Abe Scarr, director of the nonprofit watchdog Illinois Public Interest Research Group, has criticized Peoples Gas for neglecting the most at-risk pipes while prioritizing a system-wide upgrade from low-pressure to medium-pressure service.

"We’re concerned that Peoples Gas’ system is old, has known risks and thousands of miles left of aging pipe," Scarr said Wednesday. "And they’ve known those pipes were at risk since 1980, and they’ve consistently failed to replace those pipes in quick fashion."

Scarr said the public deserves to know why the outage happened.

"If this happened a couple weeks ago when it was really cold, people could’ve been in really bad shape," he said.