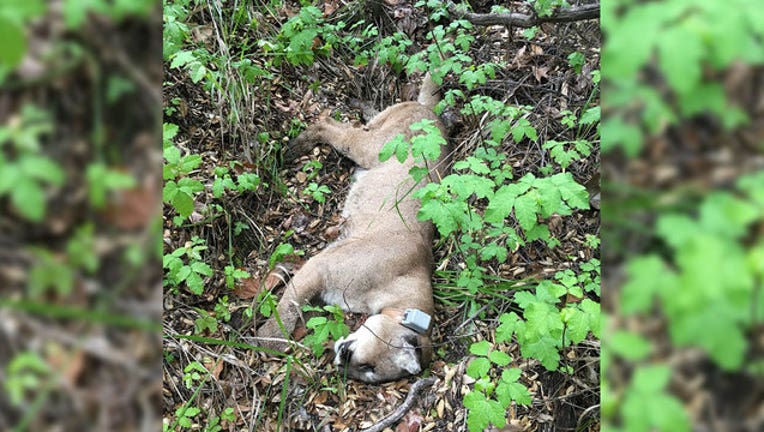 LOS ANGELES, Calif. (FOX 11) - Authorities believe that rat poison may have killed a mountain lion that was being tracked by National Park Service researchers in the Santa Monica Mountains.

According to the NPS, the lion known as P-47 was found dead March 21. Researchers found his remains after the GPS collar the lion was wearing sent out a "mortality signal.''

The 3-year-old lion had no visible wounds, but liver tests determined he had been exposed to six "anticoagulant compounds,'' according to the park service. A necropsy revealed he may have succumbed to poisoning from anticoagulant rodenticide - rat poison. It also showed the lion had "internal hemorrhaging in his head and lungs.''

Although it's unclear exactly how the lion ingested the poison, researchers said lions often get it in their systems when they eat smaller poison-infected animals. According to the NPS, rat poisons have been found in 21 out of 22 local mountain lions they have tested.

"It's unfortunate to see an otherwise healthy mountain lion lost from what appears to be human causes,'' Seth Riley, wildlife ecologist for Santa Monica Mountains National Recreation Area, said in a statement. "In P-47's case, it's also a big loss because we don't believe he had yet mated and passed along his genes, which would have been valuable since he had ancestry from north of the Santa Monicas.''

Community activists in California are urging residents to contact local legislation in support of AB 1788, which aims to ban rodenticide poisons in the state, like the one suspected of killing P-47.