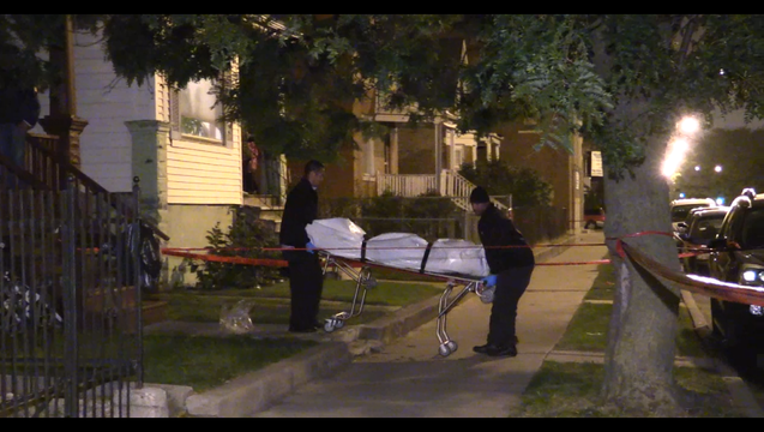 A man was shot to death Sunday night in the 6800 block of South Loomis, police said. | Network Video Productions

CHICAGO (Sun-Times Media Wire) - One man was killed and at least 11 others — including a 14-year-old girl — have been wounded in shootings across the city since Friday night.

The man was shot to death Sunday night in the West Englewood neighborhood on the South Side.

Craig Curry, 48, was shot in the head about 8 p.m. during a domestic dispute in the 6800 block of South Loomis, according to Chicago Police and the Cook County medical examiner’s office.

Curry, who lived on the same block as the shooting, was pronounced dead at the scene less than 20 minutes later, the medical examiner’s office said.

Police said no one has been taken into custody in connection with the shooting as Area South detectives conduct an ongoing homicide investigation.

The most recent nonfatal shooting happened Sunday evening in the Brighton Park neighborhood on the Southwest Side.

A 16-year-old boy was standing with several other males in an alley in the 4500 block of South Troy about 8:40 p.m. when he heard gunfire and realized he’d been shot in the abdomen, police said. He was taken in critical condition to Mount Sinai Hospital. A police source said the boy is a documented gang member.

About five minutes earlier, a 26-year-old woman was injured in another West Englewood neighborhood shooting. She was getting out of a vehicle in the 6400 block of South Hoyne Avenue at 8:35 p.m. when she heard shots and felt pain, police said. The woman suffered a gunshot wound to the left foot and was taken to Holy Cross Hospital in good condition.

Sunday morning, a separate West Englewood shooting left a 14-year-old girl injured. She was shot in the elbow in the 6400 block of South Honore at 11:45 a.m. and was taken in good condition to Advocate Christ Medical Center in Oak Lawn, according to police and fire officials.

A man was shot earlier Sunday in the Ashburn neighborhood on the Southwest Side. The man, 27, was sitting in a van about 3:45 a.m. in the 8400 block of South Komensky when another vehicle pulled up and someone inside opened fire, according to Chicago Police. He was shot in the shoulder and was taken to Christ Medical Center, where he was listed in good condition. A police source said the man is a documented gang member.

About three hours earlier, a man was shot and critically wounded in the Gage Park neighborhood on the Southwest Side. The man, 21, was a passenger in a vehicle at 12:37 a.m. in the 5300 block of South Sacramento when someone outside the vehicle began firing shots, police said. The man was shot in the back of the head and was taken in critical condition to Holy Cross Hospital. He was later transferred to Mount Sinai Hospital. Police said the shooting may have been gang-related.

Saturday afternoon, two men were wounded in a Grand Crossing neighborhood shooting on the South Side. The men, ages 20 and 29, were both shot about 4:45 p.m. in the 7500 block of South Kenwood, police said.  The 29-year-old was shot in the chest and was taken to Stroger Hospital, while the younger man suffered a gunshot wound to the right leg and was taken to Jackson Park Hospital and Medical Center. Both of their conditions were stabilized. A police source said the younger man has documented gang ties and both men were not cooperating with investigators.

About noon Saturday, a man was shot in the leg in the Humboldt Park neighborhood on the West Side. The 20-year-old was walking in the 800 block of North Lawndale when he heard shots and realized he’d been struck, police said. He was taken to Stroger Hospital in good condition.

About four hours earlier, a man was wounded in a shooting in the East Garfield Park neighborhood. The 27-year-old was shot in the shoulder about 8 a.m. in the 2800 block of West Wilcox, according to police. He was taken to Mount Sinai Hospital, where his condition was stabilized. Police said the man is a documented gang member and the shooting might have been gang-related.

Earlier Saturday morning, a 41-year-old man was shot while driving in the Edgewater neighborhood on the North Side. He was driving in the 5600 block of North Broadway about 3 a.m. when someone in a passing vehicle fired at him, police said. He was shot in the leg and taken to Weiss Memorial Hospital, where his condition was stabilized. Investigators think the shooting was gang-related, police said.

In the weekend’s first shooting, a 15-year-old boy was shot in the knee in the Auburn Gresham neighborhood on the South Side. He was outside in the 900 block of West 87th Street about 10:10 p.m. Friday when he heard shots and felt pain, police said. He was taken to Christ Medical Center in good condition.

Additionally, officers shot and killed a man who shot and stabbed a female during a domestic argument Sunday morning in the North Lawndale neighborhood.

11th District officers responded to a call of shots fired and a man armed with a gun in the 3500 block of West Grenshaw about 8:30 a.m., according to a statement from police.

When the officers arrived, a witness told police that someone inside the home had been shot, police said. The officers tried to go inside but the door was locked.

The officers talked to a male inside, who refused to open the door, police said. The officers forced their way inside and saw a male armed with a handgun. The officers repeatedly ordered him to drop the weapon, but he ignored them and pointed it at the officers.

The officers fired, fatally shooting the man, police said. He was identified as 31-year-old Jeffery McCallum, and he lived at the address where the shooting happened, according to the Cook County medical examiner’s office.

A female was discovered inside the home with a gunshot wound and several stab wounds, police said. She was taken in serious condition to Mount Sinai Hospital.