A social media video showed the armed couple standing outside their home Sunday evening, shouting at protesters, while people in the march urged the crowd to ignore them.(Credit: Daniel Shular via Storyful)

ST. LOUIS (AP) - Authorities executed a search warrant at the St. Louis mansion of a white couple whose armed defense of their home during a recent racial injustice protest drew widespread attention, their attorney confirmed Saturday.

Joel Schwartz, the couple's lawyer, said a search warrant was served Friday evening and that the gun Mark McCloskey was holding in the video was seized. Schwartz told The Associated Press that arrangements have been made to turn over to authorities on Saturday the gun that Patricia McCloskey had been holding, adding that her gun was inoperable at the time of the protest and still is.

The couple has not been charged, and Schwartz said charges against them would be “absolutely, positively unmerited.”

“A search warrant being executed is clear indication of what the circuit attorney's intentions are. Beyond that, I can't comment,” Schwartz said.

Circuit Attorney Kimberly Gardner, who is St. Louis' top prosecutor, issued a statement after the June 28 incident in which she said she was “alarmed” by what happened and that “any attempt to chill (the right to peacefully protest) through intimidation or threat of deadly force will not be tolerated.” Calls to Gardner's office on Saturday ran unanswered.

Schwartz said that under Missouri law, people who are in reasonable apprehension or fear have the right to take necessary steps to defend themselves.

“In this particular situation, people not only broke the law and trespassed on private property, but they committed property damage,” Schwartz said, adding that a St. Louis business was burned down and a retired police captain was killed in the week leading up to the confrontation. 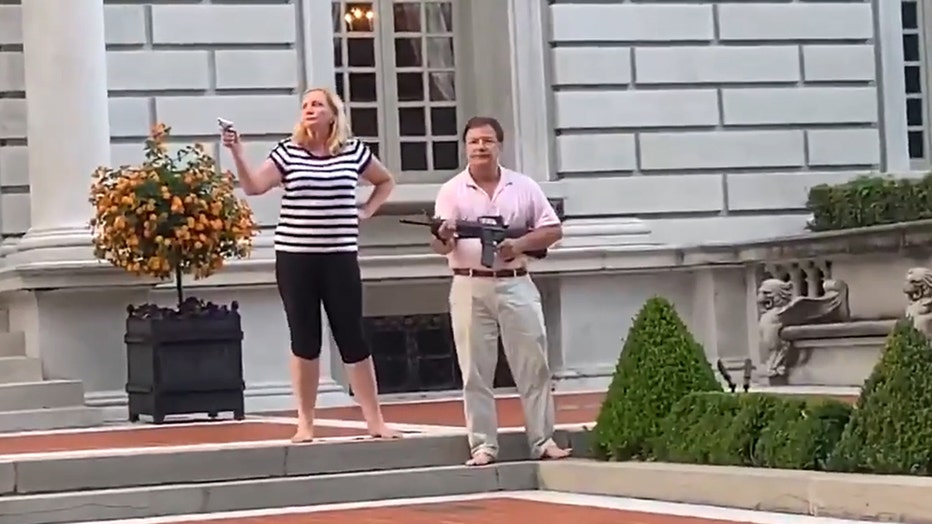 A social media video showed the armed couple standing outside their home Sunday evening, shouting at protesters, while people in the march urged the crowd to ignore them. (Credit: Daniel Shular via Storyful)

Meanwhile, the St. Louis Post-Dispatch reported Saturday that public records and interviews show the McCloskeys are almost always in conflict with others, typically over control of private property.

They filed a lawsuit in 1988 to obtain their house, a castle built for Adolphus Busch’s daughter and her husband in the early 20th century. At the McCloskeys’ property in Franklin County, they have sued neighbors for making changes to a gravel road and twice evicted tenants from a modular home on their property.

Mark McCloskey sued a former employer for wrongful termination and his sister, father and his father’s caretaker for defamation.

Mark McCloskey said in an affidavit that he has defended the patch previously by pointing a gun at a neighbor who tried to cut through it.