Police in North Las Vegas arrested a dad who they said admitted to leaving his 6-month old son in a car while he gambled inside a casino. The temperature on the night of the incident was 100 degrees Fahrenheit. (Credit: North Las Vegas Police Department via Storyful)

NORTH LAS VEGAS, Nev. - A dad is facing charges after allegedly telling arresting officers that he left his 6-month-old son unattended in a hot car while he went inside a casino to gamble.

"Mitchell told me he shouldn’t have done what he did and that he deserved anything that was coming to him," Officer Osvaldo Cerda-Guzman wrote in the police report. "He went on to say that there was no excuse for it and no reason for it."

Police released body camera footage of the July 16 incident that showed officers removing the crying child from the car, then handing him over to paramedics for evaluation. EMTs told police the child’s temperature and vitals appeared normal, but they still transported him to a local hospital for evaluation.

Since 1998, 893 children have died due to vehicular heatstroke, according to the National Highway Traffic Safety Administration. Ten of those fatalities have already occurred in 2021.

NHTSA reminds parents to check for children in cars

According to the police report, a woman informed security at Bighorn Casino that a child was alone and crying inside a vehicle in the parking lot. Security responded to the vehicle and found the child inside the car with all but the driver’s window rolled up.

Investigators said the driver’s side window was rolled down about four inches.

Security called the police, who arrived at 10:19 p.m. The body camera worn by Officer Cerda-Guzman shows Sgt. Becky Salkoff pouring cold water on the baby in an attempt to cool the child down.

The police report stated the temperature that night was 100 degrees Fahrenheit, with 14% humidity. Officers and paramedics could be heard on the video saying the child was still warm to the touch.

While officers were at the scene, they spotted a man — later identified as Hooks — approaching the area. When authorities asked him if he knew who the vehicle belonged to, Hooks allegedly admitted it was his, and said he understood he was in trouble, the police report said. 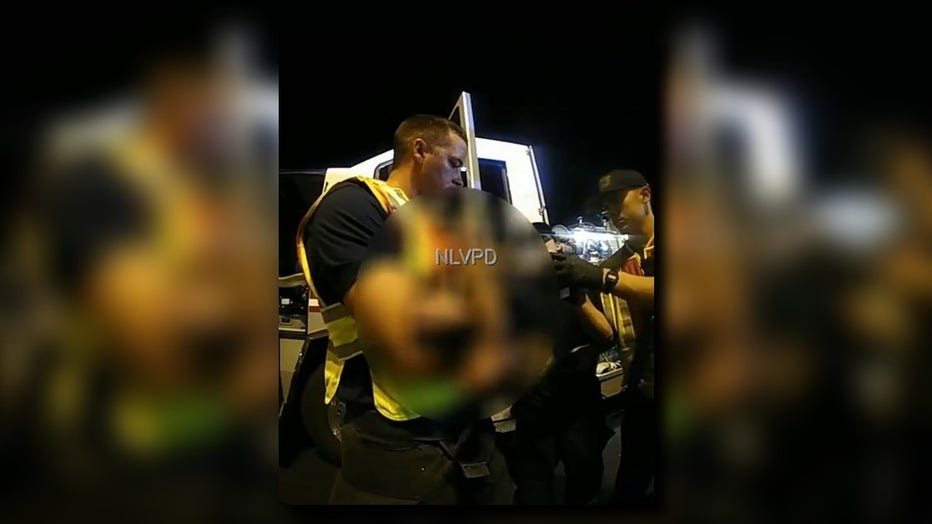 Police in North Las Vegas arrested a dad who they said admitted to leaving his 6-month old son in a car while he gambled inside a casino. The temperature on the night of the incident was 100 degrees Fahrenheit. (Credit: North Las Vegas Police Departm

Police said Hooks initially stated he only went inside Bighorn Casino to use the restroom, but later admitted to leaving his son in the car while he stepped inside to gamble.

Hooks told investigators that he and his son left home to pick up the boy’s sister and drop her off at a friend's house, police said. Instead of returning home, he went to the casino, according to the police report.

Investigators said surveillance footage showed Hooks arriving in the parking lot at 9:46 p.m. and entering the building a minute later. He faces charges for child abuse or neglect and leaving a child unattended in a motor vehicle with bail totaling $21,140.