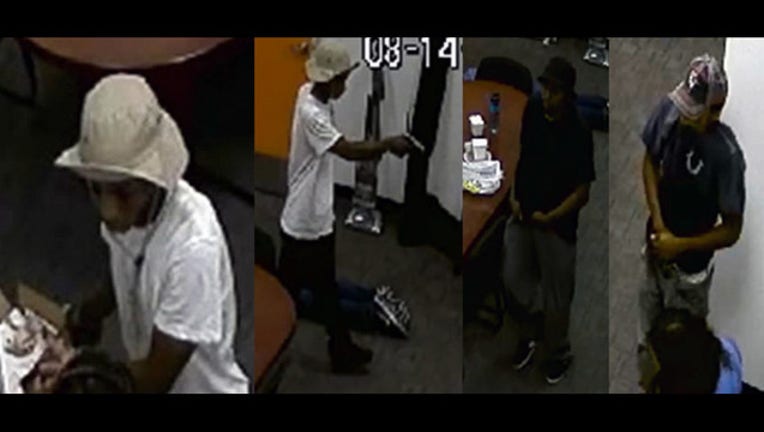 Surveillance photos of the three suspects who robbed the AT&T Cell Phone store in the 2300 block of North Farnsworth Avenue at gunpoint Aug. 14 in Aurora. | Aurora police

About 8:05 p.m. Aug. 14, two suspects, at least one was armed with a gun, approached a 22-year-old man and a 33-year-old woman working at the AT&T cellphone store in the 2300 block of North Farnsworth, according to a statement from Aurora police.

The suspects announced a robbery and led the victims to a back room, where they were joined by a third suspect, police said.

The robbers then gained a key to a room where new merchandise is kept, and stole about $33,000 worth of phones, iPads, tablets and other items, police said.

The robbers then left in a champagne- or gold-colored Chevrolet Blazer, police said. They may have also had a second vehicle, which appeared to be an older, red, two-door Honda Civic with aftermarket headlights and the rear window painted black with a white cross or emblem on it.

All three are described as black males. Of the two that entered the store first, one is 5-foot-6, appeared to be 18-23, and had long, black hair, a tattoo in the left center of his neck and studded earrings, police said. He was wearing a white shirt, dark pants and beige floppy hat.

The other robber who entered the store first is described as 5-foot-8 and in his early 20s, wearing a black t-shirt, light-colored jeans and black hat, police said.

The third suspect was also in his early 20s, stood 6-feet and had short black hair. He wore a beige shirt with blue stripes and blue jeans, police said.