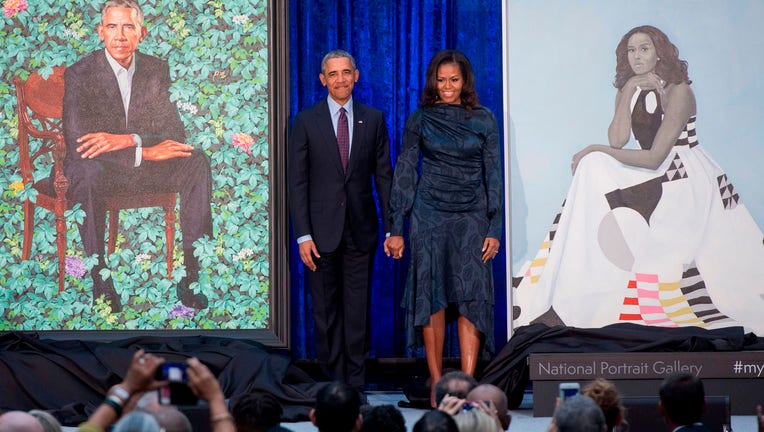 CHICAGO - The official portraits of former President Barack Obama and former first lady Michelle Obama from the National Portrait Gallery will begin a five-city national tour in Chicago in June 2021.

The Art Institute of Chicago will host the portraits from June 18, 2021, to August 15, 2021, the gallery announced Thursday.

Kehinde Wiley's portrait of Barack Obama and Amy Sherald's portrait of Michelle Obama were unveiled in February 2018. Wiley and Sherald are the first African-American artists chosen to paint the gallery’s official president and first lady portraits.

“Since the unveiling of these two portraits of the Obamas, the Portrait Gallery has experienced a record number of visitors, not only to view these works in person, but to be part of the communal experience of a particular moment in time," Kim Sajet, director of the Washington gallery, said in a statement. “This tour is an opportunity for audiences in different parts of the country to witness how portraiture can engage people in the beauty of dialogue and shared experience.”

Barack Obama's portrait includes green vines and bright flowers surrounding the 44th president. Chrysanthemums, which are the official flower of Chicago, dot the painting. The background also includes jasmine from Hawaii, where Obama was born, and African blue lilies, which represent the birthplace of Obama’s father: Kenya.

After leaving Chicago, the portraits will travel to the Brooklyn Museum in New York, the Los Angeles County Museum of Art, the High Museum of Art in Atlanta and the Museum of Fine Arts in Houston.