On hand for the bill signing was 4-year-old Gus 'Jett' Hawkins, a Chicago boy who was told by his school leaders that putting his hair in braids was a dress code violation. The incident was the inspiration for the law.

Jett's mother, Ida Nelson, said he wanted to connect with his culture, but his school, Providence St. Mel, told her the braids were against the rules. The school has since changed its policy.

Jett and Ida’s story caught the attention of Sen. Mike Simmons, who introduced the bill to prevent discrimination of hairstyles historically associated with race, ethnicity or hair texture, including, but not limited to, protective hairstyles such as braids, locks and twists. 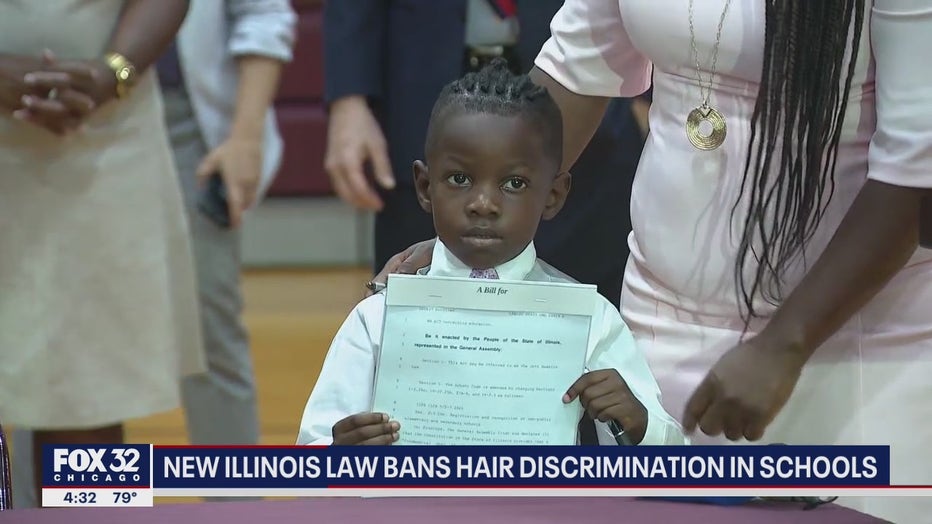 Pritzker says banning hair discrimination is another step in making Illinois one of the most inclusive in the country.

"Black students have been faced with discipline and exclusion at schools, simply for wearing hair styles such as afros, braids and locks, with damaging ramifications, in part on their mental health," Pritzker said.

The State Senate is considering legislation that would protect the rights of students to wear their hair in styles historically associated with race, ethnicity and hair texture like braids, dreadlocks or twists.

Nelson called the signing of the legislation "monumental."

"For us, this is bigger than just hair. Our hair is an extension of who we are as a race and is deeply connected to our cultural identity," Nelson said. "This is one huge step towards improving the mental health outcomes for our children, as it ensures that they will be in healthier learning environments. Our hair, our blackness, our existence, deserves to be celebrated vs tolerated."

The new law will take effect on Jan. 1, 2022, and will include all schools in the state of Illinois.