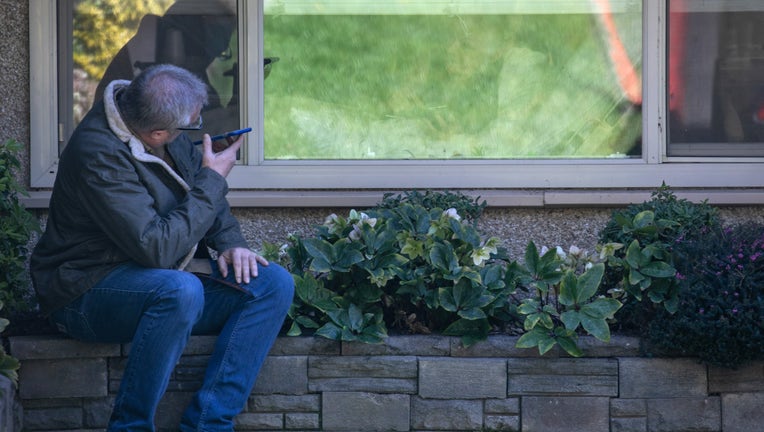 KIRKLAND, WASHINGTON - MARCH 09: Marty Shape speaks by cell phone to his mother Judy Shape (behind glass) who resides at the Life Care Center nursing home on March 09, 2020 in Kirkland, Washington. The nursing home outside of Seattle has had the most

KIRKLAND, Wash. - Desperate to talk to their dad, Scott Sedlacek and his brother, Steve, stood outside his open nursing home window and shouted. They could barely hear his weak replies, but one came through clearly.

Chuck Sedlacek arrived at the Life Care Center of Kirkland three weeks ago for physical therapy, just before the suburban nursing home became the epicenter of the nation's worst coronavirus outbreak.

Now he's in worse shape than before.

He's in isolation after contracting the virus, but his symptoms haven't progressed enough to warrant moving him to a hospital. He came seeking rehab for a broken ankle and banged-up knee after a fall, but he hasn't gotten out of bed in two weeks. Though he previously lived independently in a senior community where he could walk the halls and visit old friends, he's now losing his mobility from lack of exercise.

His five children have hardly spoken with him because his near blindness and neuropathy in his hands make it tough for him to use a phone. And, they say, the overwhelmed Life Care staff has given him just two sponge baths since he arrived.

"He's an inmate as much as he is a patient," said Scott Sedlacek, 64, who also caught the virus. "We all love and really care about our dad, and we are absolutely scared. Loneliness kills a lot of people, too. We think this is a license for death."

The Sedlaceks' experience is a grim tale of what residents and their loved ones face as the coronavirus spreads around the country and enters other long-term care facilities. While most people recover from the virus and many have mild symptoms, elderly residents are especially at risk.

The virus has been confirmed in at least 11 nursing homes or senior apartments in western Washington. A cluster has also emerged at a veterans home in Lebanon, Oregon, where eight cases were confirmed in recent days.

Nursing homes around the country -- which are frequently cited for infection control problems -- are on high alert for coronavirus, boosting their cleaning regimens and clamping down on visitors.

The families of the remaining Life Care residents have reason to be terrified. More than two dozen coronavirus deaths have been linked to the facility, and more than half of those inside have tested positive.

The residents remain in a purgatory. They are mostly restricted to their rooms with no visitors. Roommates or neighbors across the hall have vanished without explanation. Some people are confused about what's going on.

The families, meanwhile, say their anguish has been compounded by mixed messages and a lack of information.

The nurses have told the Sedlaceks they check their father's temperature every four to eight hours, less often than the two hours promised by administrators. That's troubling, since the virus seems able to cause fevers to spike drastically in a short period. The family has no idea how or when they'll be able to transfer their father out of the center if he recovers from the virus.

Families also question why, long after the outbreak began in China, the U.S. health system was so ill-prepared to test for coronavirus that the facility was still admitting new patients, including Chuck Sedlacek, even after the first resident had been sent to the hospital with flu-like symptoms.

Life Care said there was no reason to think the cornavirus was present until it received news Feb. 29 that a resident had tested positive. Administrators said remaining workers -- one-third are out with virus symptoms -- are doing what they can to care for residents.

"All I can say is the nurses share your frustration," spokesman Tim Killian told the Sedlaceks when they questioned him during a media availability outside the nursing home this week. "We have diminished capability to take care of all the patients in the exact manner they need. ... We do need more help."

The inability to comfort confused parents has been especially painful.

June Liu's family used to pick her up several times a week for home-cooked Taiwanese meals and church services. The 93-year-old, who doesn't speak English, has lived at Life Care for two years since a small stroke.

During a flu outbreak there last year, she was able to leave the facility to stay with her daughter, Su Wilson. But now she's stuck at the facility after developing a cough two weeks ago and testing positive for the virus. She doesn't understand why no one is coming to visit her and why she can't go stay with her family.

"I think she's very, very depressed, not knowing what's going on," Wilson said. "This is sad for a lot of families and for us. The staff are trying to do their best, but are you caring for their mental health, or is it just `Isolation! Isolation! Check vitals! IV!'?"

Wilson has now taken to leaving homemade soup outside the nursing home for staff to bring inside to her mom.

There is hope that outbreaks at other nursing homes might be less severe as they adopt restrictions and learn from Life Care's experience.

For example, at the senior living community where Chuck Sedlacek typically lives, Emerald Heights in Redmond, a staff member at a skilled nursing facility developed symptoms early this month and immediately began staying home before a test confirmed the disease. Eleven residents deemed at risk were quickly isolated and tested; only one was positive.

Meanwhile, though, a resident of the separate independent living community has been confirmed to have the disease and is now in self-isolation.

"Despite our advanced planning, we're having to run very, very fast to stay ahead of this virus," said Kris Egskov, Aegis Living president, after a resident at Aegis Marymoor in Redmond, Washington, tested positive. "We are preparing for the long-haul and accept that this may in fact be an entirely new paradigm in which to protect our residents."

Scott Sedlacek visited his dad four times before Life Care was locked down to visitors on Feb. 29. No one inside was even wearing face masks, he said.

On March 1, the son's joints began to ache. He spent two days trying to get tested for COVID-19, asking doctors as well as public health officials. Even though he'd spent time at Life Care, the center of the worst U.S. outbreak, he couldn't obtain a test until after his fever spiked, he had trouble breathing and his wife brought him to a hospital emergency room, which cleared him of the flu and other illnesses.

He felt fine again within 12 hours of being treated with a bronchial nebulizer, and he quarantined himself until last Wednesday, when he cut the period short so he could visit his dad through the hospital window. He wore a yellow face mask as he yelled to him.

"This is supposed to be my last day of quarantine, but being with my dad is way more important," Sedlacek said that night. "He's in there and he's lonely. The big thing we wanted to convey to him was, `We're here for you, we love you and we want you to get better -- we just can't be in there with you."'