Former Illinois Democratic Gov. Rod Blagojevich gushed about Donald Trump a day after the Republican president set him free from a federal prison, delivering a 20-minute monologue Wednesday outside his Chicago home that sounded like an extended campaign commercial.

CHICAGO - Former Illinois Democratic Gov. Rod Blagojevich gushed about Donald Trump a day after the Republican president set him free from a federal prison, delivering a 20-minute monologue Wednesday outside his Chicago home that sounded like an extended campaign commercial.

Standing before a crowd of more than 100 reporters and well-wishers at the steps of his house, the governor-turned-convicted felon even offered an endorsement of Trump's bid for a second term.

“I'm a Trumpocrat,” said the one-time contestant on Trump's reality TV show, "Celebrity Apprentice." “If I had the ability to vote, I would vote for him.”

Felons in Illinois can vote once they leave prison, though they have to register again, according to the state Board of Elections.

The carnival feel of his first scheduled press event since going free included a giant photo of Blagojevich's head, which the two-term governor signed for the person holding it. A banner draped over a stoop behind Blagojevich read, “Thanks Mr. President.” One man in the crowd wore a rubber Blagojevich mask and hoisted the former governor's 2006 campaign sign.

Blagojevich, flanked by his wife and two daughters, effusively praised Trump after he commuted his 14-year sentence after serving eight years. He cast the president as a reformer of a flawed criminal justice system. Trump did sign a sweeping criminal justice bill in 2018 that was praised by lawmakers and advocates of all political stripes. But critics have said Trump has undermined the justice system, including most recently by weighing in on the sentencing of his longtime confidant Roger Stone.

Blagojevich, 63, once was regarded as a rising political star for his Bill Clinton-like ability to connect with voters, but he has been radioactive in Illinois political circles for years. Political analysts in the state sounded doubtful that candidates would get much of a boost from the disgraced ex-governor hitting the campaign trail for them.

"Maybe Trump might," said Dick Simpson, a former Chicago alderman and a respected political analyst. "But every other candidate in Illinois will run as fast as they can away from Blagojevich. … Most candidates don't want to be endorsed by the poster child of corruption."

Although there was no indication Trump would recruit him, Blagojevich as governor was comparatively popular in black communities - a constituency Trump recently has been courting.

Simpson, the political analyst, said some minorities might be open to political messages from Blagojevich, who helped expand health care coverage to more children. "But it's a very small group," he said.

Now that Blagojevich is out of prison, there was little sign of change in him other than his trademark jet-black hair turning white behind bars. Outside his home, the poetry-quoting Blagojevich demonstrated not even a hint of remorse for the multiple counts of political corruption jurors convicted him on.

Blagojevich took no questions after his remarks Wednesday, in which he echoed Trump by portraying himself as a victim of a federal justice system run amok.

"From the beginning," he said about his case, "this was persecution masquerading as prosecution."

Prosecutors and federal judges who have reviewed Blagojevich's case have balked at those suggestions, which Blagojevich began making almost immediately after his arrest. They say there was overwhelming evidence that Blagojevich broke the law, including trying to squeeze a children's hospital for campaign donations.

Blagojevich address the media alongside his family

In a tweet he fired off while Blagojevich was still speaking in Chicago Wednesday, Trump hit on the same themes. As he has done before, Trump compared efforts to investigate his own conduct to federal prosecutors who took down Blagojevich.

“It was a prosecution by the same people - Comey, Fitzpatrick, the same group,” Trump also said earlier in the week. He was referring to Patrick Fitzgerald, the former U.S. attorney who prosecuted Blagojevich and now represents former FBI Director James Comey, whom Trump fired from the agency in May 2017. Comey was not at the FBI or anywhere in the Department of Justice during the investigation and indictment of Blagojevich.

Trump's tweet also alluded to Blagojevich's convictions for seeking to exchange an appointment to the U.S. Senate seat vacated by then President-elect Barack Obama for campaign contributions.

“Rod Blagojevich did not sell the Senate seat,” Trump tweeted.

Prosecutors have said, however, that they decided to arrest then-Gov. Blagojevich at his home on the morning of Dec. 9, 2008, so they could stop him before he could actually commit that crime.

A political science professor at Northwestern University in Evanston, Jaime Dominguez, agreed that if Blagojevich could help Trump's reelection bid any such help would be minimal.

"Blagojevich's complaints could possibly resonate with Trump's base about there being a deep state out to get … Blagojevich and Trump, that (federal prosecutors) go after people who speak their minds," he said.

During the press event, Blagojevich continually dabbed a cut on his chin with a handkerchief as he spoke, apologizing for bleeding and explaining it was a consequence of living behind bars.

“It is a long time since I shaved with a normal razor,” Blagojevich said.

When Patti Blagojevich made repeated public pleas for her husband's release from federal prison, there was no mistaking her intended audience: President Donald Trump.

For nearly two years, the wife of Rod Blagojevich made Trump's own travails, including special counsel Robert Mueller's long Russia investigation and Trump's impeachment, the centerpiece of the strategy to free her husband.

Appearing on Fox News - the one network she knew Trump watched religiously - she was careful to say not only that her husband was being mistreated, but that he was being mistreated in the same way Trump complained about being treated, and by the same cast of characters.

Those lobbying efforts that began in 2018 came to fruition Tuesday, when Trump commuted her husband's 14-year prison sentence, allowing him to return home after serving eight years behind bars.

“I see these same people who did this to my family, these same people that secretly taped us and twisted the facts and perverted the law that ended with my husband in jail. These same people are trying to do the same thing ... just on a much larger scale,” she said during a May 2018 Fox News broadcast. “They were emboldened. They took down a governor and now they've got their sights much higher.”

Patti Blagojevich's campaign began soon after her husband lost a string of legal appeals that seemed to doom him to remain behind bars until his projected 2024 release date. His wife, who comes from an influential family of Chicago Democrats, soon went on a media blitz to encourage Trump to step in. She flattered and heaped praise on the president and likened the case against her husband to the investigation into Russian meddling in the 2016 election - a probe Trump long characterized as a “witch hunt.”

Using many of the same words that Trump tweeted and said, she threw out names, including former FBI Director James Comey and former U.S. Attorney Patrick Fitzgerald, who oversaw Blagojevich's prosecution. She also mentioned Mueller, the former FBI director who was appointed to investigate the president, and described the investigation into her husband as an attempt to “undo an election by the people.” 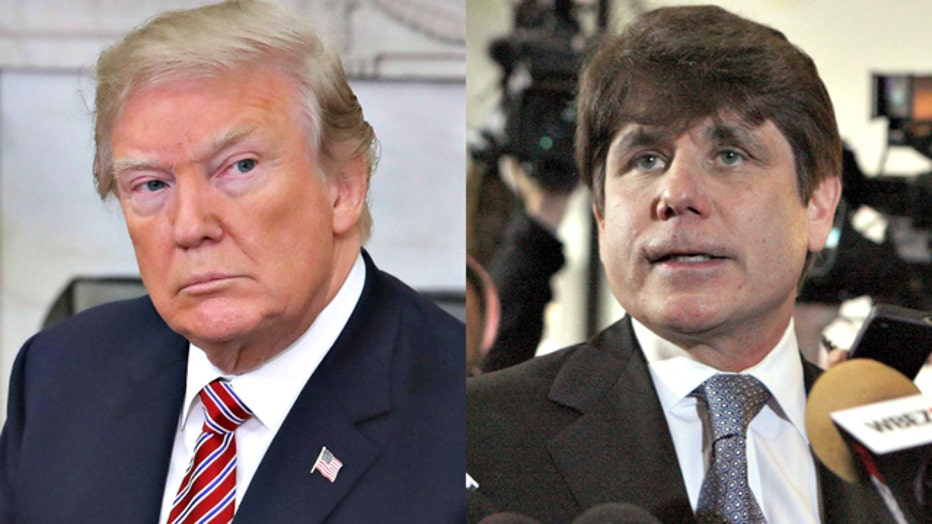 Comey was not FBI director when Blagojevich was prosecuted. Mueller was. And Fitzgerald was not involved in the Trump probe. But as Fox viewers were reminded, Fitzgerald and Comey are close.

Dave McKinney, a reporter for Chicago public radio station WBEZ who hosted a 2019 podcast about Rod Blagojevich called “Public Official A,” said he does not doubt that Patti Blagojevich was pursuing a strategy that she and the former governor discussed during their many phone conversations.

“I think they had a very simple approach to try to get to Trump, and the easiest path was to go through his news channel of choice,” McKinney said.

The couple eventually learned that their quest for backing from the White House had started to pay off. Following one of her television appearances, Trump tweeted about “how brave Patty Blagojevich is,” McKinney said.

At one point, Trump told reporters on Air Force One that he thought Rod Blagojevich had spent “enough” time behind bars and called his wife “one hell of a woman.”

Trump's sympathy seemed to build. The president said repeatedly over many months that he was considering taking executive action in Blagojevich's case, only to back away from the idea. Until Tuesday.

Blagojevich had made sure that his daughters and the fact that he was missing much of their childhoods were a big part of his plea for leniency. They spoke in court. Camera crews captured them crying.

Trump talked about the couple's children after his clemency decision.

“They're growing older. They're going to high school now,” the president said. “They rarely get to see their father outside of an orange uniform. I saw that, and I did commute his sentence.”

Robert Grant, the former FBI agent in charge of the Chicago office during the Blagojevich investigation, also recognized the effectiveness of including the children in the family's appeal.

One question now is what Trump hopes to gain from securing the freedom of a man who became a national laughingstock after his 2008 arrest and the release of now-infamous tapes in which he can be heard hatching various schemes, including one in which he sought to sell an appointment to Barack Obama's Senate seat after Obama was elected president.