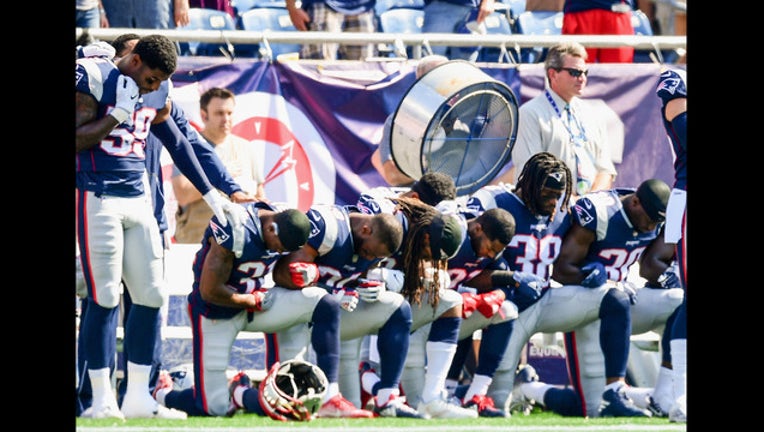 Members of the New England Patriots kneel on the sidelines as the National Anthem is played before a game against the Houston Texans at Gillette Stadium on September 24, 2017 in Foxboro, Massachusetts. (Photo by Billie Weiss/Getty Images)

GREENVILLE, SC - A South Carolina restaurant owner says he won't be playing any more NFL games at his establishment until all players stand during the national anthem. App users click here.

David McCraw, owner of Palmetto Restaurant and Ale House in Greenville, posted the announcement on the restaurant's Facebook page Sunday.

"No NFL games will be played at Palmetto Alehouse until every player stands in respect to our flag and our country. This is a position that I'm going to take and I hope you will support me," the post reads.

Dozens of NFL players, coaches and owners protested during Sunday's national anthem in response to President Trump calling for the firing of players who kneel during the anthem. More than 130 players sat, knelt, or raised their fists in defiance. A week ago, just four players didn't stand and two raised their fists.

President Donald Trump addressed the kneeling protests in a series of tweets calling the movement disrespectful, though he did commend those who stood with arms interlocked.

"The issue of kneeling has nothing to do with race. It is about respect for our Country, Flag and National Anthem. NFL must respect this!"