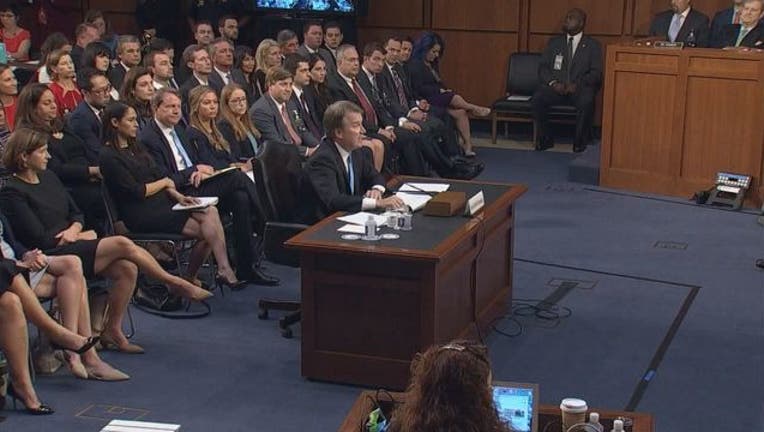 WASHINGTON - (AP) -- After two marathon days questioning Brett Kavanaugh, senators were winding up his Supreme Court confirmation hearing Friday with legal experts making their cases for and against the judge who is likely to push the high court further to the right.

Senate Democrats worked into the night Thursday in a last, ferocious attempt to paint Kavanaugh as a foe of abortion rights and a likely defender of President Donald Trump. But Kavanaugh appears on his way to becoming the court's 114th justice.

The 53-year-old appellate judge stuck to a well-rehearsed script throughout his testimony, providing only glimpses of his judicial stances while avoiding any serious mistakes that might jeopardize his confirmation. Republicans hope to confirm Kavanaugh in time for the first day of the new Supreme Court term, Oct. 1.

On Friday, lawmakers were hearing from more than two dozen witnesses on both sides of the nomination fight.

Democratic witnesses expressed concern about Kavanaugh's record on a range of issues including affirmative action, the rights of people with disabilities, access to birth control and abortion. The witnesses included Rochelle Garza, the legal guardian for a pregnant immigrant teenager whose quest for an abortion Kavanaugh would have delayed last year.

New York University law professor Melissa Murray told lawmakers that Kavanaugh would provide the "necessary fifth vote that would utterly eviscerate" the 1973 Roe v. Wade decision establishing a constitutional right to abortion. "And make no mistake about it. A vote for judge Kavanaugh is a vote against Roe," she said.

On the Republican side, witnesses testifying in support of Kavanaugh included longtime friends, a former law clerk and a former student. They talked about his intelligence and open-mindedness, calling him "thoughtful," "wonderfully warm" and a "fair-minded and independent jurist."

Yale law school professor Akhil Reed Amar, a liberal testifying in support of Kavanaugh, had a message for Democratic senators: "Don't be mad. He's smart. Be careful what you wish for. Our party controls neither the White House nor the Senate. If you torpedo Kavanaugh you'll likely end up with someone worse."

John Dean, Richard Nixon's White House counsel who cooperated with prosecutors during the Watergate investigation, was among those scheduled to testify later Friday.

In written testimony released ahead of his appearance, Dean predicted that with Kavanaugh on the Supreme Court, it will become "a weak check, at best, on presidential power." He called the scenario "deeply troubling," adding that there is "much to fear from an unchecked president who is inclined to abuse his powers."

Trump, campaigning in Montana on Thursday night, sought to elevate Kavanaugh's confirmation as a political litmus test for voters, saying the judge deserves bipartisan support and criticizing the "anger and the meanness on the other side -- it's sick."

Abortion was a focus throughout Kavanaugh's two days of testimony. The Democrats' best shot at stopping Kavanaugh -- who could swing the court further to the right for decades -- would be branding him as a justice who might vote to overturn the court's landmark Roe v. Wade ruling. Their hope is that two Republican senators who support abortion rights could break from their party and vote against him.

An email disclosed Thursday suggested Kavanaugh once indicated the abortion case was not settled law, though Kavanaugh denied in the hearing that he had been expressing his personal views.

The tone in the email from 2003 contrasted with his responses to questions on Wednesday, when he stressed how difficult it is to overturn precedents like Roe. In the email, Kavanaugh was reviewing a potential op-ed article in support of two judicial nominees while he was working at the George W. Bush White House. The document had been held by the committee as confidential but was made public Thursday.

"I am not sure that all legal scholars refer to Roe as the settled law of the land at the Supreme Court level since Court can always overrule its precedent, and three current Justices on the Court would do so," Kavanaugh wrote, referring to justices at the time, in an email to a Republican Senate aide.

The document was partially redacted.

Asked about it by the committee's top Democrat, Dianne Feinstein of California, Kavanaugh reiterated his previous testimony that "Roe v. Wade is an important precedent of the Supreme Court."

Democrats also questioned Kavanaugh's ability to separate himself from Trump and special counsel Robert Mueller's investigation of Russia's meddling in the 2016 election. Throughout his testimony, Kavanaugh repeatedly stated the importance of judicial independence.

Much of the debate among senators focused more on the disclosure of documents than on Kavanaugh's record. The document battle stemmed from Kavanaugh's unusually long paper trail following his years in the Bush White House. The panel's process resulted in hundreds of thousands of pages of Kavanaugh's documents being withheld as confidential or kept from release under presidential privilege by the Trump White House.

"My process was fair," Grassley declared.

Read more on AP's coverage of Kavanaugh at https://apnews.com/tag/Kavanaughnomination