WASHINGTON - Senate Democrats on Tuesday are pressing ahead on voting rights legislation, facing intense pressure to change the filibuster rules that have stalled voting measures in the past — and likely will again amid holdout lawmakers.

The Senate opened on Tuesday, launching a debate on legislation that combines the two major voting bills: the Freedom to Vote Act and the John Lewis Voting Rights Advancement Act. The House has passed the package, but the legislation is stalled in the Senate, opposed by Republicans.

With a 50-50 split in the upper chamber, Democrats have a narrow Senate majority. Vice President Kamala Harris can break a tie, but they lack the 60 votes needed to overcome the GOP filibuster.

Focus and recent criticism have centered on two pivotal Democrats, Kyrsten Sinema of Arizona and Joe Manchin of West Virginia, for their refusal to change the Senate filibuster rules. Both say they support the package, but they are unwilling to change the Senate rules to muscle it through that chamber over Republican objections.

On Monday, the two were singled out by Martin Luther King III, the son of the late civil rights leader. The younger King compared Sinema and Manchin to the White moderate his father wrote about during the civil rights battles of the 1950s and 1960s — a person who declared support for the goals of Black voting rights but not the direct actions or demonstrations that ultimately led to the passage of the landmark legislation.

"History will not remember them kindly," he said, referring to Sinema and Manchin by name. 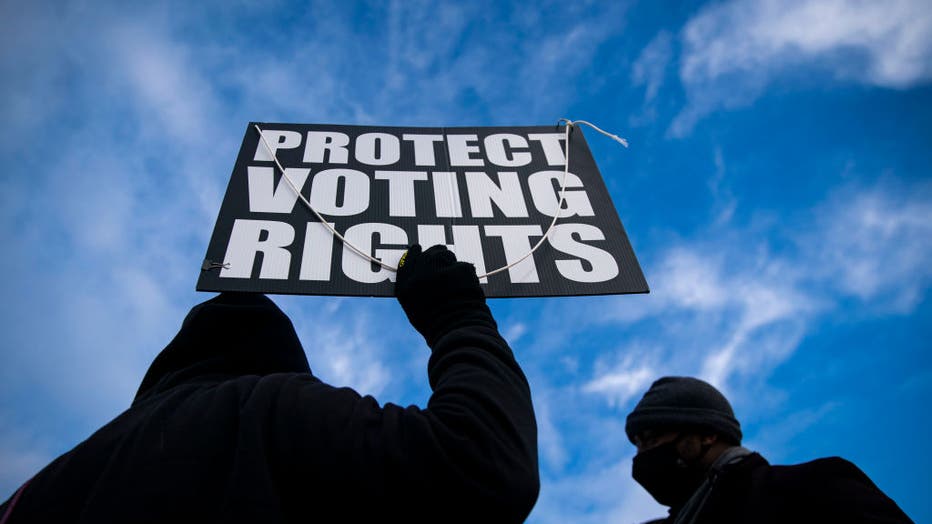 Senate Majority Leader Chuck Schumer acknowledged the current bill's likely defeat this week. But he said the fight is not over as he heeds advocates' call to force all senators to go on record with their positions.

"The eyes of the nation will be watching what happens this week," Schumer said as he opened the session Tuesday.

This will be the fifth time the Senate will try to pass voting legislation this Congress, as elections officials warn that new state laws are making it more difficult to vote in some parts of the country.

Voting rights advocates in Georgia and nationwide are increasingly anxious about what may happen in 2022 and beyond, following the enactment of Republican-pushed laws that make it harder to vote coming off Donald Trump’s loss in 2020 and his subsequent push to overturn the results, despite no evidence of widespread fraud.

Georgia has been at the center of it all, one of the key battleground states in the 2020 elections. After the votes were counted and recounted, Trump told a top state election official he wanted the official to "find" enough votes to overturn his loss. The state’s votes nonetheless went to Biden, and both of its Senate seats went to Democrats as well.

In 2021, Georgia’s Republican governor signed a sweeping rewrite of election rules that, among other things, gives the State Election Board new powers to intervene in county election offices and to remove and replace local election officials. It also includes restrictions on voting by mail, including cutting the time people have to request an absentee ballot and limits where ballot drop boxes can be placed and when they can be accessed.

After Biden called Georgia’s law "Jim Crow in the 21st Century," Gov. Brian Kemp accused the president and others of attempting to "destroy the sanctity and security of the ballot box."

Once reluctant to change Senate filibuster rules, President Joe Biden used the Martin Luther King Jr. holiday to pressure senators to do just that to push the voting legislation through Congress. But the push from the White House, including Biden's blistering speech last week in Atlanta comparing opponents to segregationists, is seen as too late, coming as the president ends his first year in office with his popularity sagging.

The Senate is now launching what could become a week-long debate, but the outcome is expected to be no different from past failed votes on the legislation. Biden has been unable to persuade Sinema and Manchin to join other Democrats in changing the rules to lower the 60-vote threshold. In fact, Sinema upstaged the president last week, reiterating her opposition to the rules changes just before Biden arrived on Capitol Hill to court senators’ votes.

Senators have been working nonstop for weeks on rules changes that could win support from Sinema and Manchin, only to see their efforts repeatedly dashed.

The two senators, both moderates, have expressed openness to discussing the ideas, but have not given them their backing. Both have also argued that preserving the Senate filibuster rules as they are, at the 60-vote threshold to advance legislation, is important for fostering bipartisanship. They also warn of what would happen if Republicans win back majority control, as it is distinctly possible this election year, and could easily pass GOP-backed bills.

Meanwhile, Senate Republican leader Mitch McConnell, who is leading his party against the voting legislation, has argued the legislation is a federal overreach into state-run elections, and he harshly criticized Biden's speech last week as "unpresidential."

What would the Freedom to Vote: John R. Lewis Act do?

The Freedom to Vote: John R. Lewis Act, named for the late Rep. John Lewis, includes some of the most sweeping changes to elections in a generation, including making Election Day a national holiday in an effort to make it easier for all voters to get to the polls.

It would require access to early voting and mail-in ballots that became overwhelmingly popular during the COVID-19 pandemic and ensure that states make voting more accessible for people with disabilities.

What would the John R. Lewis Voting Advancement Act do?

The John R. Lewis Voting Advancement Act would restore key portions of the Voting Rights Act of 1965 that were stripped by the Supreme Court in the 2013 Shelby County v. Holder decision.

The ruling in Shelby County v. Holder tossed out a "pre-clearance" provision that required officials in more than a dozen, mostly Southern states to receive federal approval before making changes to the voting process.

The John R. Lewis Voting Advancement Act would establish new criteria for determining which states must get pre-clearance before changes to voting practices may take effect.

What is the Senate filibuster again?

The U.S. Senate filibuster is among the upper chamber’s "most characteristic procedural features," according to the Congressional Research Service.

The Senate has a longstanding practice of allowing any senator to object to the proceedings, what’s generally referred to as a filibuster that can prolong debate and delay or prevent a vote on a bill, resolution, amendment or other debatable question.

"Whether praised as the protector of political minorities from the tyranny of the majority, or attacked as a tool of partisan obstruction, the right of unlimited debate in the Senate, including the filibuster, has been a key component of the Senate’s unique role in the American political system," an official historical overview states.

The type of filibuster most Americans are familiar with is the marathon speech by a small group of senators or even a single senator.

Prior to 1917, the Senate rules did not provide for a way to end debate and force a vote. That year, the Senate adopted a rule to allow a two-thirds majority to end a filibuster, according to its official website. By 1975, the Senate agreed to lower it to three-fifths of all senators — or 60 votes.

Once the debate is brought to a close, senators can move forward with consideration of the measure at hand, amendments or even final votes.

Can the Senate change the filibuster rules?

It takes 51 votes to change the Senate rules, a tall order at most times but especially in the now evenly split 50-50 Senate and holdouts like Manchin and Sinema.

But senators have changed the filibuster rules before. Fed up with the Republicans stonewalling Barack Obama’s executive and judicial branch nominees, Democrats led by then-Sen. Harry Reid of Nevada changed the rules to set a simple 51-vote threshold for confirming people in those positions.

Republicans under McConnell of Kentucky went a step further, eliminating the filibuster for Supreme Court nominees, which allowed Donald Trump’s three high-court justices to be confirmed.