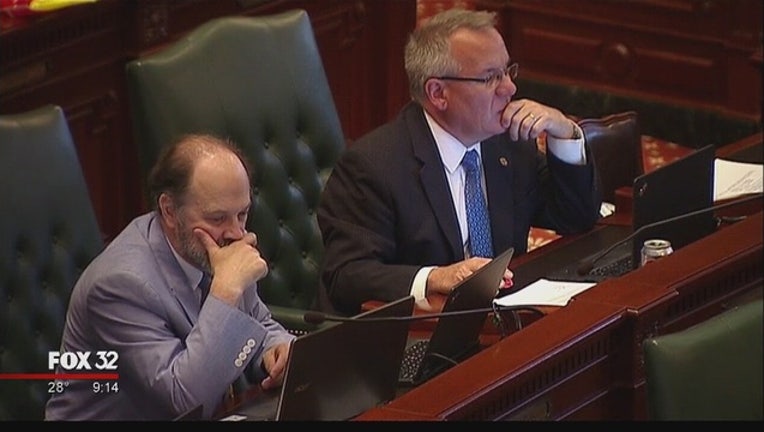 Cullerton, a Chicago Democrat, noted the Senate had twice reneged on promised January votes to strike a bold stance that there's a way out of the two-year logjam between Democratic legislative leaders and GOP Gov. Bruce Rauner. He said it was time for action.

Republican Radogno, of Lemont, accused Cullerton of a "breach of our agreement," arguing the whole package was supposed to be ready before counting any votes.

"When are we going to do this if we don't do it today?" Cullerton asked. "Let's vote."

Sen. Terry Link, a Crystal Lake Democrat, acknowledged talks will continue. And despite tense debate, Cullerton conferenced privately with Radogno on the floor after the Senate adjourned.

It's unlikely there will be additional floor action Thursday when the Senate returns. It's the last work day scheduled before Rauner delivers his plan Wednesday for the budget year that begins July 1.

It will be the first-term governor's third budget plan without any becoming law. The state has been without an annual spending plan since July 2015.

The Senate package includes an income-tax increase and proposals to meet Rauner's agenda such as cost-saving changes to the workers' compensation program and a freeze on local property taxes. But Senate Republicans have balked at putting "yes" votes on a tax increase, particularly because other plans, such as the one on workers' compensation, are not yet to their liking.

"There are parts of this package that are not yet settled," Radogno said. "By cutting loose parts of that package, we're basically taking the other issues off the table and saying there's no longer any way to approve those."

The lone measure that failed was a comprehensive pension-program overhaul Cullerton has pushed for years. He introduced it Wednesday as being Rauner-endorsed. He said the governor repeatedly asks him, "Where's your bill? Vote on your bill." It failed 18-29 and Radogno claimed she was blindsided.

Radogno said Cullerton advised her of votes on what she described as "low-hanging fruit" but broke his word by calling for them on the pension measure.

Rauner spokeswoman Catherine Kelly did not immediately respond to a request for comment.

"We cannot sit here and not do anything anymore," Sen. Iris Martinez, a Chicago Democrat, said after the action. "I've got to go back home and explain to my constituents that we are starting the process."