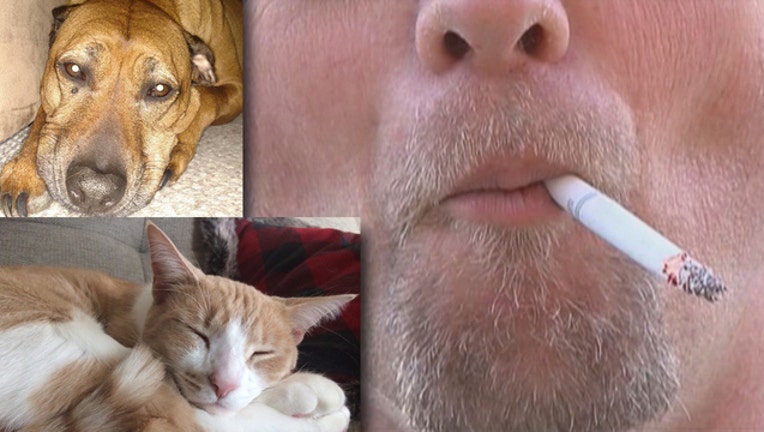 The FDA has a new warning for pet owners who also smoke - it's not just second-hand smoke that's harmful for your four-legged friends.

The United States Food and Drug Administration says pets are also at risk for being exposed to residue that lingers on skin, clothes, carpets, and other household items.

“Smoking’s not only harmful to people; it’s harmful to pets, too,” FDA veterinarian Carmela Stamper, D.V. M. said. “If 58 million non-smoking adults and children are exposed to tobacco smoke, imagine how many pets are exposed at the same time.”

Certain dog breeds are at an increased risk for nose and lung cancer and cats living in the homes of people who smoke more than a pack a day have triple the risk of lymphoma, according to the FDA.

Both second-hand smoke and third-hand smoke can harm pets. Third-hand smoke is defined by the FDA as residue that's left behind - such as nicotine. It gets on your skin, furniture, and almost everything where a smoke lives.

“Like children, dogs and cats spend a lot of time on or near the floor, where tobacco smoke residue concentrates in house dust, carpets and rugs. Then, it gets on their fur,” Stamper explains. “Dogs, cats and children not only breathe these harmful substances in, but pets can also ingest them by licking their owner’s hair, skin, and clothes.”

Of course, most animals groom themselves, meaning that residue getting transfered from the floor, couch, or your hand to their fur - which they then ingest.

The danger goes beyond larger animals - smoking can endanger birds, guinea pig, and even fish.