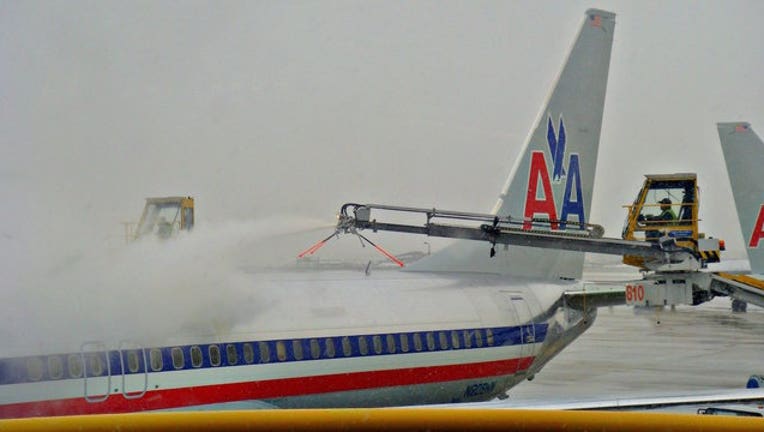 CHICAGO - Chicagoans were met with a sloppy, late-season — or wrong-season — snowfall on Saturday, and it’ll be a while yet until they can finally say that spring has sprung.

Steady rain transitioned into heavy, wet flakes of snow downtown shortly after 11 a.m., with a winter weather advisory from the National Weather Service slated to last until 11 p.m.

The snow could accumulate in some areas, with totals of 1-3 inches expected in the northern areas of Cook, Kane and DuPage counties. An earlier storm warning released by the weather service had anticipated as much as 8 inches in some northern areas of the region.

Not much was sticking in the Loop by 5 p.m., though.

The messy “spring” weather was causing havoc at the city’s airports, with 596 flights canceled at O’Hare and 135 at Midway by the evening.

It also forced the White Sox to cancel their afternoon matchup with the Detroit Tigers at Guaranteed Rate Field.

The Department of Streets and Sanitation has deployed about 200 snow vehicles to respond to the downfall, department spokesperson Marjani Williams said, with salt spreaders focusing on the city’s “arterial routes and Lake Shore Drive” before moving on to residential streets.

Saturday’s storm carries risks for high winds and lakeshore flooding as well, the weather service said. Commuters are advised that travel on Saturday could be very difficult.

Overnight temperatures could drop into the 20s and a hard freeze was possible, the weather service said.

A high of 47 was expected Sunday, with more rain possible Sunday night. Temperatures are expected to jump back into the 50s early next week.

The latest that Chicago has ever seen an inch of snow was May 3, 1907, National Weather Service Meteorologist Andrew Krein said. Usually, snowfall can be expected to stop accumulating in mid-March.