Four people were in a Dodge Durango at a red light around 1:37 a.m. when two gunmen started shooting at them from the sidewalk in the 400 block of South Wells Street, police said.

A 38-year-old man who was in the car was shot in the back. A 31-year-old woman who was also riding in the Durango suffered gunshot wounds to the legs and back. They were both listed in critical condition, police said.

The third passenger, a 28-year-old woman, was shot in the leg and was taken to Stroger Hospital in fair condition, police said.

The driver of the Durango dropped all three gunshot victims off at the hospital and was pulled over by Illinois State Police around 1:44 a.m. on an Interstate 290 ramp near 1st Avenue, officials said.

He was taken into custody without incident, according to Illinois State Police. 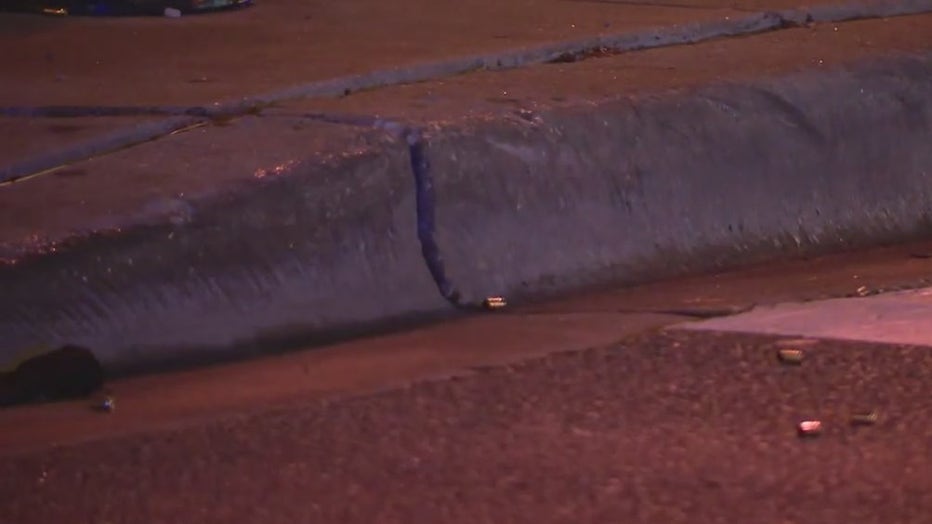 Shell casings littered the scene at Wells Street and Ida B. Wells Drive where a gunman shot four people early Tuesday in the South Loop.

Gunfire at the scene also struck a 26-year-old woman in the leg as she was crossing the sidewalk. She was taken by paramedics to Stroger Hospital in fair condition.

Dozens of evidence markers were scattered around the scene at the intersection of Wells Street and Ida B. Wells Drive.

The shooting follows several downtown attacks over the weekend. Two people were hit by gunfire in an alley in the Chicago Theater District Sunday, including a stagehand for a musical that was later canceled for the evening. A teen was fatally shot inside a Streeterville hotel, and a woman was killed outside 10 Bowling Lounge in River North.

Shooting have sharply risen in the Central and Near North police districts covering the Loop and River North. The districts have seen 23 homicide and shooting victims through April 30 of this year. That’s a 64% jump compared to the same time period in 2021, according to a Sun-Times analysis of police data.

After the new numbers were released Monday, Mayor Lori Lightfoot said city officials need to "step up our efforts downtown."

"Particularly distressing is, again, the number of young people that seemingly are involved in acts of violence," Lightfoot said at a news conference. "It’s clearly not acceptable and that’s why we’ve got to keep doing, I think, the things that we know are working."

Police Supt. David Brown said his department is increasing patrols in the downtown area — as it is in other parts of the city.

"We are not going to be a part of treating one neighborhood differently than another based on whatever reasons," Brown said. "All of these neighborhoods are important to us as the police department. We are adding resources not only to the downtown — we are adding to the downtown — but the CTA needs more resources and so does areas on the South Side and areas on the West Side."