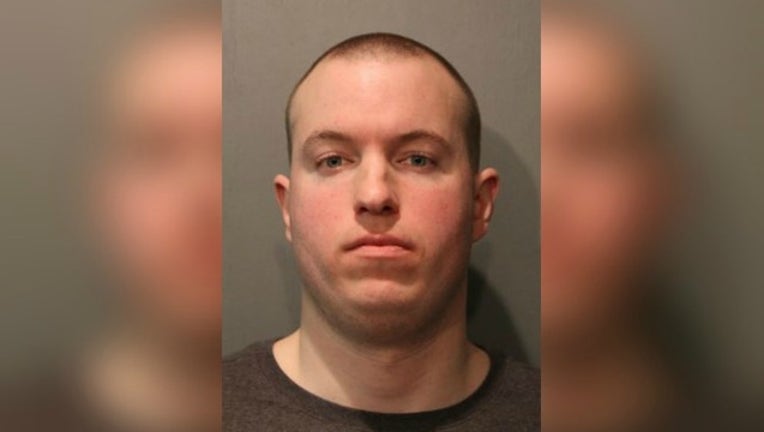 On his left arm is the phrase “Jesus Is Love,” according to police. On his right shoulder, a swastika.

Wright, 31, was charged with a hate crime for allegedly smashing the window of a downtown synagogue and putting swastika stickers on its doors in early February. Three months earlier, he alarmed members when he visited a Pilsen church, one that was a target of racist vandalism six times in 2016, the Chicago Sun-Times is reporting.

Anti-Semitic incidents have been increasingly visible in recent months. Three Jewish cemeteries across the country were vandalized within one week in February, and several dozen Jewish community centers, including one in Hyde Park, have received bomb threats since the beginning of the year.

Wright graduated from Hinsdale Central High School in 2003 and went on to the University of Iowa. He later received a master’s degree in accounting from DePaul University.

In Hinsdale Central’s 2000 and 2002 yearbooks — Wright’s freshmen and junior years — he was not listed as a member of any clubs or team sports. In both yearbook photos he has curly blonde hair, unlike recent mugshots in which he has a shaved head.

According to Wright’s LinkedIn profile, he worked as an accountant for four companies between June 2012 and September 2015. He became a certified public accountant in 2013 and his license is valid until September 2018, according to state records.

Property records show Wright’s father — a retired investment banker — owns a five-bedroom, six-bathroom house with a three-car garage in west suburban Oak Brook. It has been for sale since February 2016 with a price tag of nearly $1.5 million.

Wright, his father, his attorney and his landlord all did not respond to interview requests.

Wright was associated with several addresses, including one in Elmhurst and, most recently, an apartment in Pilsen. The Sun-Times went to Wright’s address in the Pilsen neighborhood and there were no outward signs of him being there.

The 2000 block of South Loomis is dotted with single-family homes, two- and three-flat buildings, some built below grade. Some residents keep signs in their windows advocating for immigrant rights, with another reading “Not My President.”

It was in that block where Wright was arrested Feb. 7 for the synagogue vandalism and, prosecutors said, where he had Nazi paraphernalia outside his apartment. A pamphlet called “How To Own A N—–” was found inside.

His bail was set at $150,000 and he was released after he posted bond two days after he was charged. His next court date is March 9.

Wright’s arrest came four months after another run-in with police.

On Oct. 17, he was in a Portillo’s in west suburban Elmhurst, a place he patronized regularly, though the staff said he was “a person who gives them a hard time sometimes,” according to police records.

A fan of paintball, police said Wright stuck the grip of a paintball gun inside an empty Funyuns bag and brought it inside. Some customers and staff were afraid it was a handgun, so they called police. Wright, who was seated near the door, “seemed nervous, looking around and watched as people entered,” according to police records.

At one point he stood up and pointed the bag — which contained only the gun’s grip — at a wall, police said.

After police got to the restaurant, they told arriving customers not to go inside. One officer, armed with a rifle, walked in through the rear door without Wright seeing him, records show. He had his gun pointed at Wright as other officers brought him to the ground and arrested him. He didn’t resist.

Asked why he didn’t put the grip in his pocket, Wright said, “I was just being stupid.” He later said that “I wouldn’t say I was pointing it at people specifically.”

Wright’s Facebook profile picture is one he took of himself, standing in front of a mirror and holding a paintball gun. It was uploaded seven days before he was arrested in Elmhurst.

Wright was later charged with aggravated assault and ordered held on $1,500 bail. He pleaded not guilty. In January, his attorney withdrew and was replaced by Michael Byrne, who is also representing Wright in his Chicago case, DuPage County court records show.

Wright was arrested in the synagogue vandalism the same day he appeared in court for the Portillo’s aggravated assault charge, prosecutors said.

After prosecutors in DuPage County learned of him being charged in the synagogue vandalism, they asked a judge to increase his bail to $100,000, though the judge ultimately reset it at $20,000, records show. Wright’s father posted his bond.

Less than a month after his Elmhurst arrest, Wright visited Lincoln Methodist Church, which serves a predominantly Hispanic congregation, near his apartment in Pilsen. He told church leaders he had moved to the neighborhood two days earlier.

Robert Samar, 60, was charged with felony criminal defacement to a place of worship but not a hate crime. He pleaded not guilty. Court records say he was released on electronic monitoring while awaiting trial. Samar, who lives about a mile west of Wright’s apartment on Loomis, did not respond to a request for comment.

Church members were put off enough by Wright’s visit that they called the police and photographed him participating in Bible study. After the church was vandalized for the fifth time, security cameras were installed, which led to Samar’s arrest, according to church staff members.

Sarah Walker, the assistant to the pastor, said during Wright’s 3 1/2 hours at Lincoln Methodist, he asked churchgoers about their immigration status and asked Walker if the church had other programs that drew a lot of people. Walker said she lied and told him they did not.

She added that, with the church’s reputation as a place that works “to protect and defend refugees,” it was not totally unsurprising it’d be on the radar of white supremacists.

As is customary with new church members, Wright was required to sign in. He provided his address on Loomis and an email address that combined his name and the number 88, Walker said.

With “H” as the eighth letter of the alphabet, white supremacists use the number “88” as a shorthand way to say “Heil Hitler,” according to the Southern Poverty Law Center.

Less than a week after Wright’s visit, a church member who works as a security guard volunteered to guard the door, which was now to be locked.

Wright came back the next Sunday, Walker said. But when he couldn’t open the locked door, he ran off.

Though he hasn’t come back, Wright left an impression on the congregation.