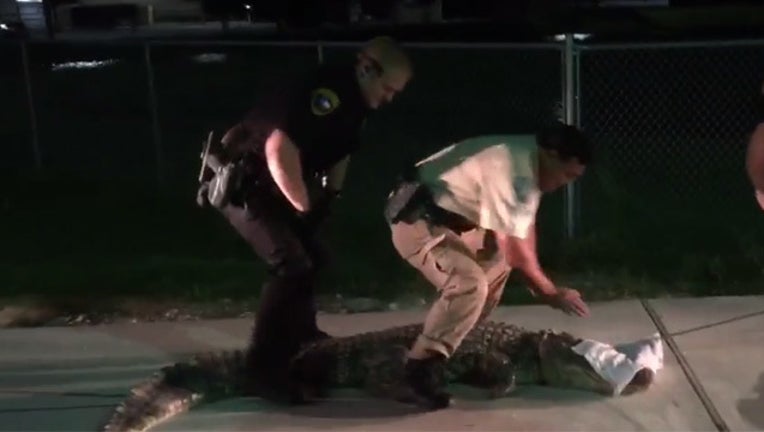 "Officers found this little 8 foot guy trying to sneak out of the pond for an after midnight shop at Walmart this morning." (Aransas Pass Police Department)

An 8-foot long alligator was stopped during its trek to Walmart by animal control officials and authorities with the Aransas Pass Police Department early Thursday morning. In a video posted by the police department, authorities are seen wrangling the gator, taping its mouth shut and covering its eyes.

In the video, Officer Allen Mize holds down the gator’s back end while Albert Flores, a game warden with the Texas Parks and Wildlife Department, holds down its front. Meanwhile, Sgt. David Muniz can be seen taping the reptile’s mouth shut, KIII-TV reported.

“Officers found this little 8-foot guy trying to sneak out of the pond for an after midnight shop at Walmart this morning,” the police department wrote, joking that the video was the first episode of “Alligators of Walmart.”

“Nice to see Walmart now has alligator. They really do carry everything,” one Facebook user joked.