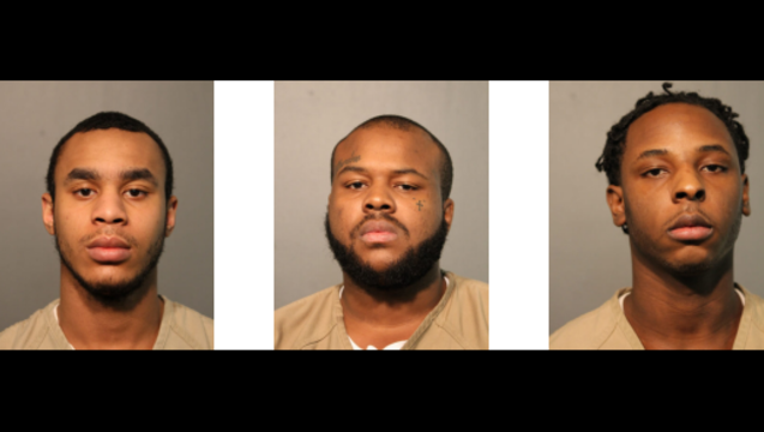 CHICAGO (STMW) - Three men were nabbed for a July 2014 shooting that left a 13-year-old boy dead and six other people wounded after one of the murderers admitted to his cellmate what he and the others had done, Cook County prosecutors said Thursday.

Almore, Harris and Lyons — all 23 — were ordered held without bail for murder and attempted murder Thursday, the Chicago Sun-Times is reporting.

Investigators were able to trace the three men’s fingerprints on the car they had used on July 25, 2014, according to court testimony.

The tan, four-door Cadillac was found on fire that night a mile away from the shootings, Holland said.

Detectives found a plastic bottle of charcoal lighter fluid on the ground outside of the driver’s side door.

The car was towed and investigators obtained a search warrant, Holland said.

At the time of the shooting, Samuel and others — a 25-year-old man, a 20-year-old man and four teenagers — were walking out of the California Food Mart at Lexington and California.

Lyons was driving the Cadillac and Almore, Harris and an unidentified male who goes by the street name “Lil Mike” were passengers, Holland said.

Almore eventually got out of the Cadillac and fired over the roof of the car in the direction of group, Holland said. Someone from the backseat also fired. Samuel was hit in the head.

While Almore was arrested for an attempted murder this year, he told his cellmate he is a Flyboy gang member, which is an offshoot faction of the Gangster Disciples, Holland said.

Almore allegedly told the cellmate he borrowed a car from a guy to look for Cali Boy gang members to shoot that night and that Harris who is known as “Chain Gang” was in the backseat and Lyons, aka Big Fooley, was the driver. He also said there was a fourth person in the car, Holland said.

After stealing a license plate from another car, Almore said the men drove around the area until they saw some Cali Boys at the corner of Lexington and California, Holland said.

Almore, of the 6800 block of South Ridgeland, admitted he shot at the group and then said he and his friends took the car to a vacant lot on Washington Boulevard where he instructed Harris to burn the vehicle, Holland said.

Almore’s fingerprints were found on the exterior roof of the car and on the passenger side, Holland said.

Harris’ prints were recovered on the exterior of the Cadillac, and rear passenger side door window frame as well as on a bottle of lighter fluid found nearby, Holland said.

Harris’ DNA were among those found on a disposable lighter inside the Cadillac, Holland said.

Lyons’ fingerprints were on the exterior passenger door, Holland said.

A surveillance video shows the Cadillac pull up to the side of the store before someone gets out of the passenger side front seat, reaches over the top of the vehicle and shoots, authorities said.

Harris, of the 1600 block of South Komensky, is in Cook County Jail awaiting trial on an attempted murder charge.

Lyons, of the 1200 block of South Harding, is serving a five-year prison sentence for a drug case.

All three defendants have children and are working toward obtaining their GEDs, an assistant public defender told Judge Donald Panarese Jr.

Harris is scheduled to appear in court again Oct. 20, and Lyons on Oct. 5. Almore’s next court date wasn’t immediately available.