Timuel Black dies in Chicago at 102

For decades, Black fought for social justice in Chicago and around the country. Recently, he was in hospice care at his home on the South Side.

Those that knew Black well say even at 102-years-old, his mind was still very sharp.

Black will forever be regarded as one of Chicago’s greatest African American historians. He worked closely with Dr. Martin Luther King Jr., Jesse Jackson and many other prominent leaders.

Black was a highly decorated World War II veteran and began his civic work early in life. He was involved with the Congress of Racial Equality and helped organize Chicago’s contingent of the march on Washington.

He also worked with the teachers union and served on countless boards.

Teacher, lecturer, activist and author were just a few of Black’s titles. He graduated from DuSable High School, Roosevelt University and earned his master’s from the University of Chicago. 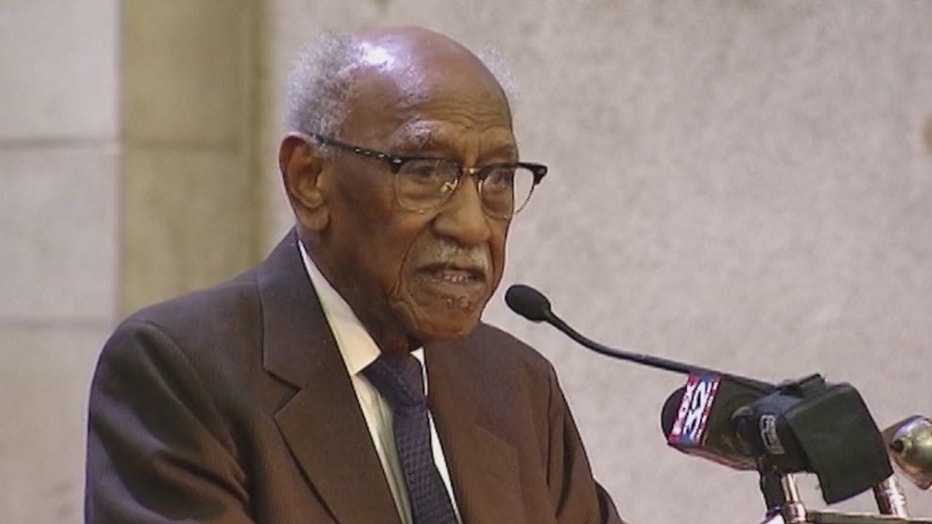 Black called Bronzeville his home since his family relocated from Birmingham, Alabama in 1919.

"My mother and father were children of former slaves, my great-grandparents, products of the Emancipation Proclamation," Black told the Chicago Sun-Times when he was 100. "I came up in a time when African American men — women, too — were being lynched, the racial segregation so terrible, people were fleeing to escape the terrorism."

He was considered an authority on the migration of southern Blacks to the northern cities.

"They fled the South for better opportunities — education, jobs, housing, the right to vote," Black once said. "Instead, they were ghettoized by landlords determined not to rent or sell to Negroes."

Former President Barack Obama said Wednesday in a statement that Black "was a testament to the power of place, and how the work we do to improve one community can end up reverberating through other neighborhoods and other cities, eventually changing the world."

In the early 1980s, Black threw himself into registering voters and campaigning to help get the city’s first Black mayor, Harold Washington, elected, according to the Chicago Tribune.

"Timuel Black has been an anchor in the most consequential struggles for racial, social and economic justice of our times," the Chicago Teachers Union said in a release Wednesday. "For generations, he marshalled his voice, his wisdom, his humanity and his tireless activism to support movements that ranged from the struggle for voting rights for Black and Brown people."

Congressman Bobby Rush released a statement on the passing of Black.

"My friend Tim Black spent every day of his life pouring his best into others. As an educator, a community activist, a civil rights activist, a political activist, a confidante, an elder, and a sage, Tim gave his all to all of us.

One of my favorite memories of Tim was being present when he was telling Herbie Hancock about his relationship with Herbie’s father and seeing the glean in Herbie Hancock’s eyes as he told the story. Tim’s enthusiasm as an author and educator was inspiring, and his impact is utterly incalculable."

"Sadden over the death of his dear friend, Rev. Jesse L. Jackson, Sr. Wednesday said Timuel Black, a professor, author, and community activist, was a great teacher and a tall tree in the civil rights forest.

He was a teacher par excellence. He followed students beyond the classroom. Tim taught them about politics and business science. He was a devotee of Dr. King’s work and those who worked on his staff.

Tim embraced us as his younger brothers and sisters. We all have a profound admiration for Tim Black. He is an icon of rare vintage…one of the rare teachers in the city of Chicago."