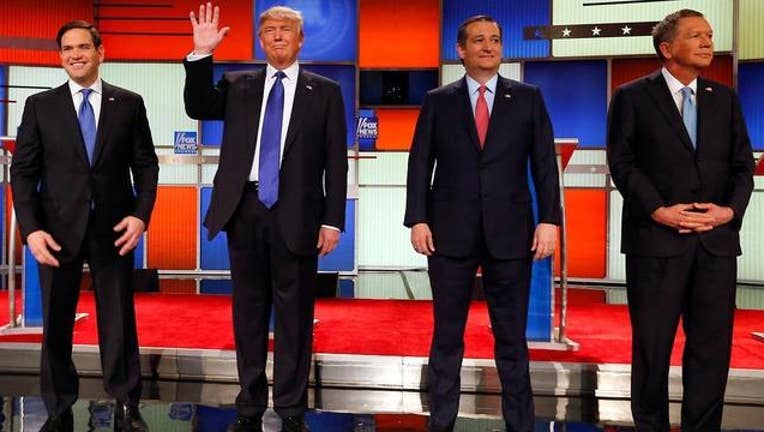 CHICAGO (AP) — As Republican presidential front-runner Donald Trump attempts to unify a fractured GOP around his candidacy, images of his supporters attacking protesters and allegations that he's inciting violence are casting new attention on the divisive nature of his candidacy.

Trump had to answer questions at Thursday night's GOP debate about video that showed a supporter punching a protester at a rally this week in North Carolina. It was the latest in a string of scuffles at his often heated rallies, at which protesters frequently clash with supporters and security.

Trump rejected the idea that he was responsible for the incidents and allegations he sets a tone at his rallies that encourages violence.

"I hope not. I truly hope not," Trump said, explaining that his debates draw thousands of people who are filled with emotion.

"People come with tremendous passion and love for the country," he said. "When they see what's going on in this country, they have anger that's unbelievable."

But during a news conference Friday, Trump applauded his supporters for taking on protesters who he says have gotten physical at his rallies.

"The audience hit back," he said. "And that's what we need a little bit more of."

Trump will hold a pair of rallies on Friday in two states that vote next Tuesday. The first is in St. Louis at the city's Peabody Opera House, the second at an arena at the University of Illinois at Chicago — a civil and immigrant rights organizing hub with large minority student populations.

Trump's visit has already created waves on the campus. Dozens of UIC faculty and staff petitioned university administrators to cancel the rally, citing concerns it would create a "hostile and physically dangerous environment" for students. Chicago police plan a heavy presence.

Rep. Luis Gutierrez, student activists and longtime Chicago organizers are all planning to protest outside the university venue over issues that include what they called Trump's disparaging comments, particularly about Muslims and Mexicans.

"Donald Trump's campaign, it incites hatred and violence with the things he says with marginalized groups that are very prevalent UIC," said Casandra Rebledo, a 19-year-old nursing student. "This is something we feel is a form of empowerment."

Gutierrez said he had no plans to enter the event. Instead, he would rally in a parking lot outside with a message focused on welcoming all.

"We're not going to let Donald Trump take us back to the 1950s," said Gutierrez, a Chicago Democrat, who has long rallied for immigrant rights. "We've worked too hard."

Organizers of a student-led group, who expected hundreds of participants, planned to meet on campus and march to the arena where Trump will speak and set up shop in a nearby parking lot. Members of Black Lives Matter Chicago, which has held largely peaceful smaller protests following a police-involved shooting in Chicago, also planned to participate.

Chicago police said they were coordinating with the Secret Service, university police and fire department officials on logistics.

The renewed attention on Trump's rallies comes after a white Trump supporter was charged with assault Thursday after video showed him punching a black man being escorted out of the venue by sheriff's deputies at a campaign rally Wednesday in North Carolina. Last year, video captured Trump supporters physically assaulting Mercutio Southall Jr., an African-American activist, at a rally in Birmingham, Alabama.

At past events, Trump has said he'd like to punch a protester in the face and promised to pay supporters' legal fees if they get into trouble. During Wednesday night's rally in North Carolina, he recalled a past protester, "a real bad dude."

"He was a rough guy, and he was punching. And we had some people — some rough guys like we have right in here — and they started punching back," Trump said. "It was a beautiful thing."

In an interview broadcast Thursday on MSNBC, Democratic presidential front-runner Hillary Clinton said she was "truly distraught and even appalled by a lot of what I see going on, what I hear being said."

"You know, you don't make America great by, you know, dumping on everything that made America great," she said, "like freedom of speech and assembly and, you know, the right of people to protest."