Trump protesters march through Chicago against deployment of federal agents

Two separate protests ended up merging into one Monday after police lifted one of the Chicago bridges to keep demonstrators from gathering in front of Trump Tower.

CHICAGO - Two separate protests ended up merging into one Monday after police lifted one of the Chicago bridges to keep demonstrators from gathering in front of Trump Tower.

It was a long day of protesting in the city. The two groups of demonstrators joined forces and shut down roads.

Earlier in the evening, dozens of people gathered at Federal Plaza for a rally against the Trump Administration’s deployment of federal agents in Portland, Oregon and at the plans of it also happening soon in Chicago.

The group walked on North Michigan Avenue and over the State Street bridge, stopping traffic along the way. 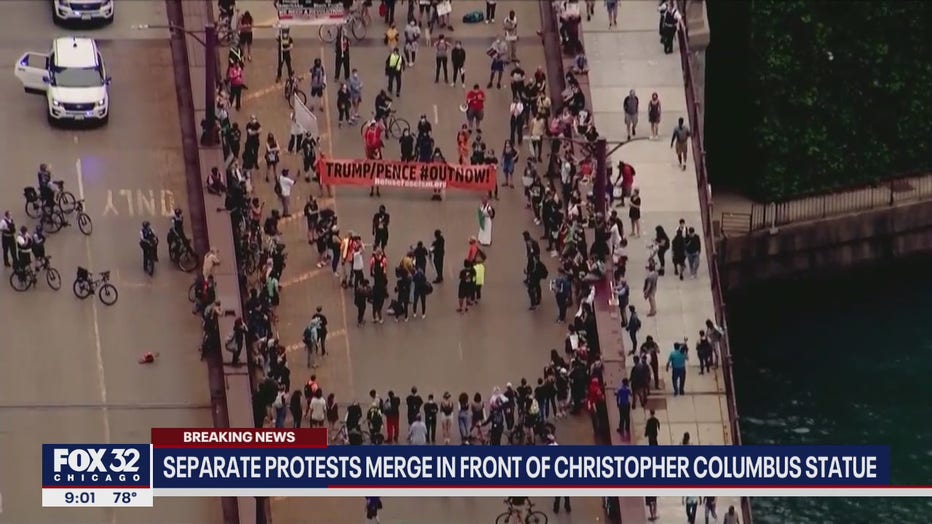 We have learned that the Department of Homeland Security is working on plans to send dozens of federal agents to Chicago this week. The Washington Post reports they will likely be border patrol agents who will target drug gangs.

Meanwhile, an organizer of Monday’s rally from “Refuse Fascism Chicago Chapter” says they have several demands, including wanting President Donald Trump and Vice President Mike Pence out of office and no police violence against protesters.

“We’re here to simply say that to the government. It’s a no go when you're taking in, harassing protesters, pulling them off the streets. That can't happen. It shouldn't happen in America, but it is happening. And we are here to be in defense of those who are continuously looking for freedom,” said Bishop Greg Greer of Freedom First International.

A separate group of protesters gathered at the Christopher Columbus statue in Grant Park to call for police to be defunded. This comes after a protest on Friday turned violent and police and demonstrators clashed, resulting in arrests and injuries.