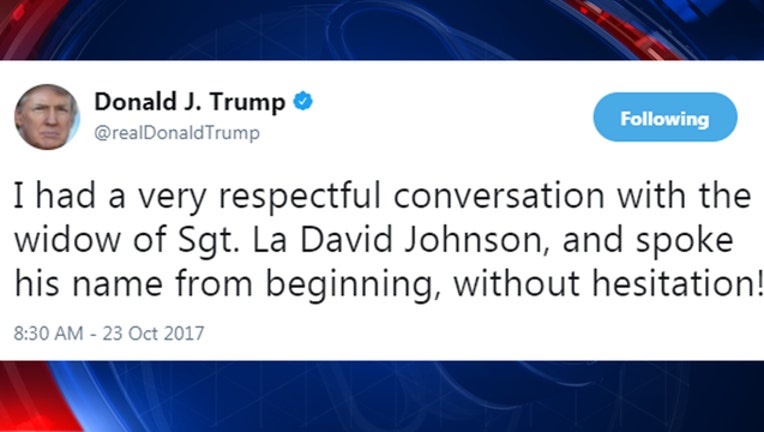 WASHINGTON - The widow of Sgt. La David Johnson spoke out for the first time Monday in a sit-down with Good Morning America regarding the controversy surrounding the phone call she received from President Donald Trump after her husband was killed.

Myeshia Johnson contradicted the President's account of the phone call, saying he made her cry even worse. She also claimed he had forgotten her husband's name.

In a tweet that followed her television interview, Trump said he had a "respectful conversation" with Myeshia and that he "spoke his name from beginning, without hesitation" during his phone call with her.

The controversy began when Rep. Frederica Wilson said Trump told Myeshia that the soldier "knew what he signed up for."  Wilson said she was in the car with Myeshia last week on the way to Miami International Airport to meet the body of Johnson's husband when Trump called.

When asked by Miami station WPLG if she indeed heard Trump say that she answered: "Yeah, he said that. To me, that is something that you can say in a conversation, but you shouldn't say that to a grieving widow." She added: "That's so insensitive."

Trump said Wilson's description of the call was "fabricated."