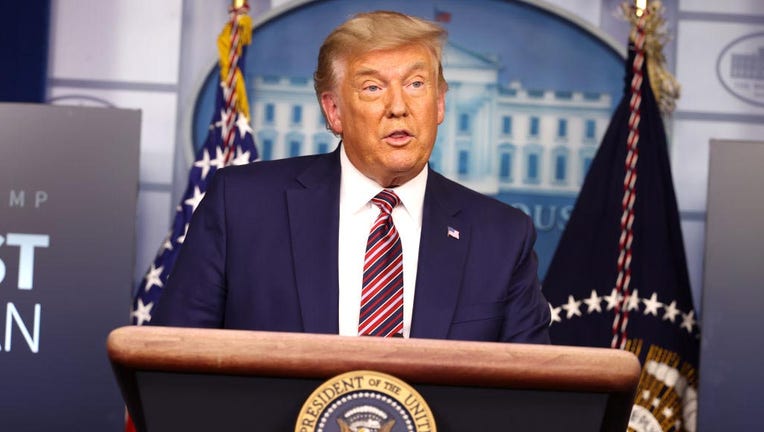 President Donald Trump speaks to the press in the James Brady Press Briefing Room at the White House on Nov. 20, 2020 in Washington, D.C. (Photo by Tasos Katopodis/Getty Images)

President Trump on Friday claimed the U.S. would not have a coronavirus vaccine on the way had he not been in the Oval Office to oversee its development.

“We’re way ahead on vaccines," Trump said during a press conference at the White House. “You wouldn’t have a vaccine if it weren’t for me for another 4 years.”

The president reasoned that the Food and Drug Administration would have never been able to do what he required them to do to speed up the process.

Through Operation Warp Speed, the Trump administration coordinated and invested in the accelerated development of a vaccine – with the ambitious goal of having 300 million doses of a safe vaccine available by January.

Pfizer and partner BioNTech SE announced they applied for emergency authorization use on Friday, after clinical trial data showed their vaccine was 95% effective in preventing infection, with no serious safety concerns observed so far.

Moderna announced earlier this week that its vaccine candidate is just shy of 95% effective, and the company is expected to apply for emergency use authorization soon.

The promising news comes as the U.S. braces for painful months ahead amid a sharp resurgence in confirmed cases. This week, the country surpassed a grim milestone as data showed more than 254,000 Americans had fallen victim to the virus since the outbreak began.

Trump made the comments as he was announcing several new cost-cutting measures designed to lower prescription drug prices.

The measures included ending rebates provided to pharmacy benefit managers, linking prices paid for drugs under Medicare to prices paid for the same drugs in other countries and ending the Unapproved Drug Initiative.

Pfizer said the timing of its results had nothing to do with Election Day.

For updates, go to Foxnews.com.