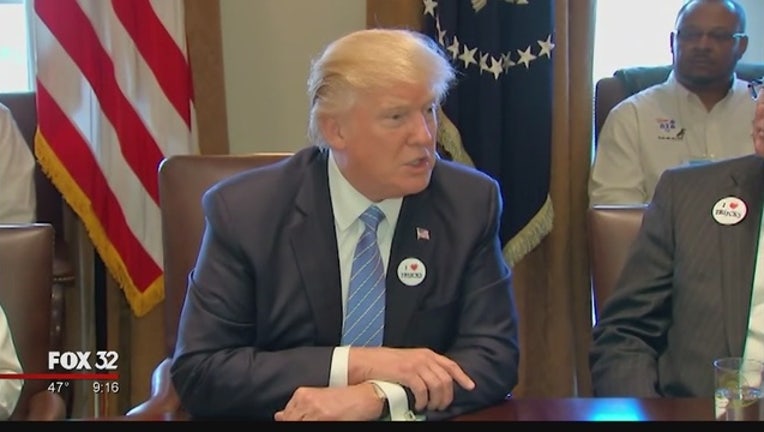 WASHINGTON (AP) - The White House's handling of intelligence reports on the Russia investigation has been labeled unorthodox and, to the Democrats, suspicious. But when it comes to Donald Trump's relationship with his spy agencies, that's par for the course.

Since taking office, Trump has challenged the integrity of intelligence officials, moved to exert more control over U.S. spying agencies and accused his predecessor of using government spycraft to monitor his presidential campaign.

This week, Trump's White House is facing allegations that it funneled secret intelligence reports to a top Republican investigating his campaign's possible ties to Russian officials as well as Moscow's interference in the 2016 election.

The approach appears to be based, at least in part, on the White House's anxiety over the Russia investigations, which threaten to seriously weaken his presidency. It also reflects a deep distrust of the intelligence community among his political advisers, including government newcomers who have never dealt with classified information or covert programs.

"It reveals a chasm of ignorance about how stuff is done," said Michael Hayden, the former head of the CIA and National Security Agency.

Trump, with the backing of political advisers Steve Bannon and Jared Kushner, initially sought to put Wall Street billionaire Stephen Feinberg in charge of a review of the intelligence agencies. An early iteration of the review explored eliminating the Office of the Director of National Intelligence, the umbrella agency created after the Sept. 11, 2001, attacks to streamline and coordinate intelligence.

Officials say they viewed the agency as an unnecessary and bloated bureaucracy that can manipulate or distort information.

But the review was recalibrated after Dan Coats - who was confirmed earlier this month as Trump's intelligence director - vigorously complained about being undermined in the midst of his confirmation hearings, according to U.S. officials. Coats is now leading the review, though it does not include potentially scrapping the office he now runs, according to the officials.

"This is going to be more on the 'trim and optimize' as opposed to 'dismantle,'" said L. Roger Mason Jr., an executive with the nonprofit Noblis and a member of the Trump transition team that focused on the national intelligence directorate.

Trump's White House has looked for other ways seize the reins.

Officials have expressed an interest in having more raw intelligence sent to the president for his daily briefings instead of an analysis of information compiled by the agencies, according to current and former U.S. officials. The change would have given his White House advisers more control about the assessments given to him and sidelined some of the conclusions made by intelligence professionals.

One official said the focus on accessing more raw intelligence appeared to be more of a priority under the short tenure of Michael Flynn, who was ousted as national security adviser after less than one month on the job. He was replaced by H.R. McMaster, an Army lieutenant general who was expected to exert more control over the NSC but has found himself struggling to overcome skepticism among Flynn holdovers who have the ear of Bannon.

Earlier this month, CIA leaders raised concerns with McMaster about an intelligence director on his staff. McMaster moved to replace him, but the staffer, Ezra Cohen-Watnick, appealed to Bannon and Kushner, who got Trump to intervene to save his job.

Cohen-Watnick was a protege of Flynn, having worked for him at the Pentagon's intelligence shop. Now the NSC's senior director for intelligence programs, Cohen-Watnick is one of about a dozen people in the White House with access to a full range of classified information, including details of U.S. covert programs. His position also gives him the ability to request intelligence products from agencies.

A U.S. official confirmed Cohen-Watnick had access to the kind of intelligence materials, but maintained he did not play a role in helping the congressman access the documents. The official pointed instead to the other official named in the New York Times report, Michael Ellis, a White House lawyer who previously worked for Nunes on the House committee.

Cohen-Watnick has privately expressed suspicion to colleagues over whether Ellis could have been responsible for some of the leaks that had been troubling the new administration in its first few weeks in office, according to an administration official.

The current and former officials insisted on anonymity because they were not authorized to publicly discuss the sensitive matters.

Nunes said the materials he saw showed the "troubling" extent to which information about Trump and his associates' communications was spread around the government in the waning days of the Obama administration. His public declarations came days after Trump officials privately suggested to reporters that they focus on that same topic, a signal that the California congressman and the White House may have been working in tandem.

Stephen Slick, who served in the CIA and NSC for three decades, said intelligence agencies go to "extraordinary lengths" to safeguard the privacy of Americans. He said officials "have no incentive to see intelligence reports they gather and distribute for national security purposes become fodder in domestic political disputes."

At least some of what Nunes viewed at the White House is believed to be communications between foreign governments discussing the incoming administration, which could have been picked up through routine monitoring of diplomats and other foreign officials living in the U.S.

Hayden said that Trump and his advisers appear to be missing the fact that such information is collected to give the U.S. government insight into the thinking of foreign powers that can be used to Washington's advantage. And as president-elect, Hayden said, Trump would have had access to much of this information.

"These people wrote this not for the Obama administration but for the American government, with full knowledge that whatever they were writing would be accessible by the president-elect or the president," Hayden said.