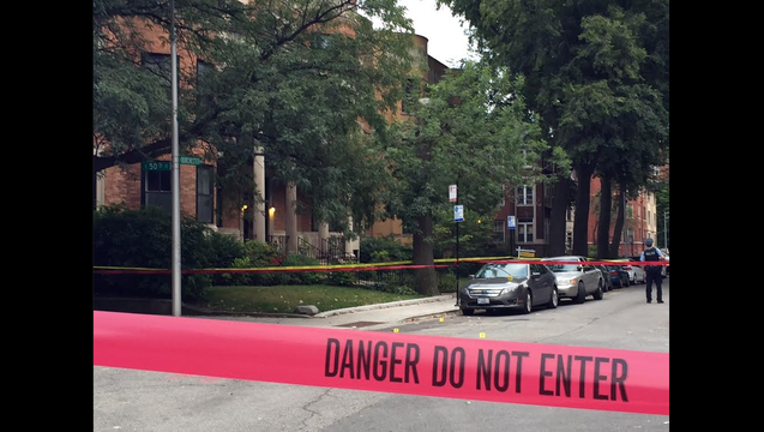 CHICAGO (Sun Times Media Wire) - Two men were killed and another 10 people were wounded in shootings across the South Side since Tuesday afternoon.

About 6 p.m., a man was shot to death less than two blocks from President Barack Obama’s Kenwood home.

The 25-year-old was in a vehicle when another vehicle approached, and someone in that vehicle fired shots, police said.

The victim drove to the 1300 block of East 50th Street, where the vehicle came to a stop, police said. He was shot several times in his upper body. He was pronounced dead at the scene.

A silver Volkswagen sedan was marked off by crime-scene tape. A crowd of about three dozen onlookers and members of the dead man’s family watched as police investigated.

Police on the scene said the shooting likely was gang-related.
Neighbors said they heard four or five gunshots.

At the time of the shooting, Kenwood Academy, which is about half a block east of the scene, was concluding football practice.

The man was shot in the head and abdomen in the 10000 block of South Wentworth, police said. He was dead at the scene, but further details were not available late Tuesday.

The most recent nonfatal shooting occurred about 10:10 p.m. in the Brighton Park neighborhood on the Southwest Side.

A 25-year-old woman was standing on the sidewalk with another male in the 4800 block of South Maplewood when a male riding a bicycle opened fire, police said. She was shot in the upper left arm and taken to Mount Sinai Hospital in good condition.

Two men — both 21 — were standing outside in the 8900 block of South Parnell when a vehicle drove past and someone inside shot them, police said.

About the same time, a man was shot in West Englewood.

The 22-year-old was standing on the sidewalk in the 5600 block of South Ashland when a blue minivan pulled up and someone got out and shot him before getting back in the vehicle, police said.
The man was shot in the right side of his abdomen and taken to Mount Sinai Hospital, where his condition had stabilized, police said.

About 8:30 p.m., another man was shot in the Auburn Gresham neighborhood.

A male riding a bicycle shot the 23-year-old in the leg in the 1900 block of West 77th Street, police said. He was taken to Christ Medical Center in good condition.

About 8:15 p.m., two teen boys were shot in the Woodlawn neighborhood.

The two boys were walking in the 6300 block of South Maryland when they heard gunshots and felt pain, police said.

The afternoon’s first shooting occurred about 1 p.m. in the Chatham neighborhood.

Three people were standing on the sidewalk in the 8000 block of South Normal when someone fired shots from a passing vehicle, police said.

Police said all three were taken to hospitals, where their conditions stabilized.

Monday, one man was killed and another nine people were wounded in citywide shootings.