The United States embassy in Afghanistan has issued a statement warning Americans trapped in the country not to travel to the airport due to security threats.

KABUL - The United States embassy in Afghanistan has issued a statement warning Americans trapped in the country not to travel to the airport due to security threats.

"Because of security threats outside the gates of Kabul airport, we are advising U.S. citizens to avoid traveling to the airport and to avoid airport gates at this time unless you receive individual instructions from a U.S. government representative to do so," the statement from the embassy reads.

"U.S. citizens who are at the Abbey Gate, East Gate, or North Gate now should leave immediately," the embassy added.

Americans who were on their way to the airport or who were waiting at the gates were warned in the message to "be aware of their surroundings," and to monitor local media in order to "adjust your plans based on new information."

Secretary of State Antony Blinken said Wednesday that he believes less than 1,000 American citizens are still in Afghanistan and attempting to leave.

Blinken said that there were 6,000 Americans who wanted to leave Afghanistan on August 14 and 4,500 of them have been evacuated within the last 10 days. He added that 500 of the remaining number have been instructed on how to leave within the last 24 hours. That leaves roughly 1,000 Americans left in the country, but Blinken said the actual number is lower for a variety of reasons, including situations where Americans want to stay or have already left and not notified the government.

"From the list of approximately 1,000, we believe that the number of Americans actively seeking assistance to leave Afghanistan is lower, and likely significantly lower," Blinken explained. 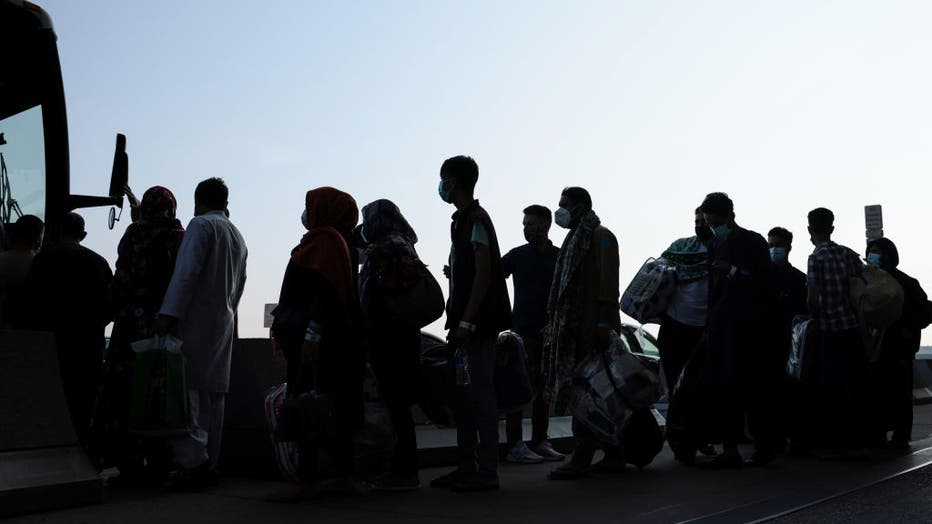 DULLES, VIRGINIA - AUGUST 25: People evacuated from Kabul Afghanistan wait to board a bus that will take them to a refugee processing center at the Dulles International Airport on August 25, 2021 in Dulles, Virginia. According to the U.S. Department

White House Press Secretary Jen Psaki was caught flat-footed during a daily press briefing Wednesday when she was asked about a group of California students who are trapped in Afghanistan.

Psaki was asked Wednesday if she knew about an LA Times report that a group of students and their parents from California's El Cajon Valley School District are currently stranded in Afghanistan.

The reporter asked, "The L.A. Times has a story saying that a group of students and their parents are in Afghanistan. Do you have any more information on that or is that?--"

"I do not. Who have recently traveled into Afghanistan?" Psaki stated in response, appearing confused about the report cited.