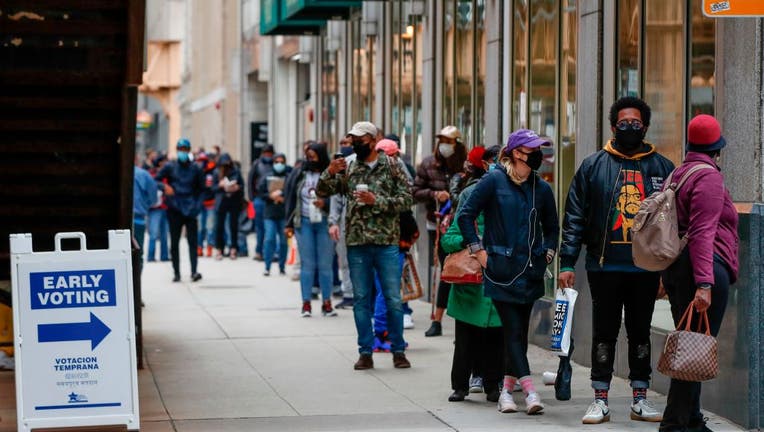 CHICAGO - A line snaked down the street and around the block in downtown Chicago on Thursday as voters braved a chilly, rainy day and set aside coronavirus fears to cast their ballots weeks ahead of the Nov. 3 election.

Concerns have been raised about how the U.S. Postal Service will handle the massive number of mail-in ballots that are expected to be cast this year. President Donald Trump has claimed without evidence that mail voting is ripe for fraud, and many of those who voted Thursday — the first day of early voting in the city — said they just wanted to avoid any problems.

“I had ordered a mail-in ballot, but the last week or two has gotten me terrified about what’s going to happen to mail-in ballots,” said 59-year-old Julie Jacobson. She said she blames Trump for the “chaos and confusion.”

”So, no monkey business,” Jacobson said. “I wanted to make sure my ballot was counted.”

Huge swaths of the electorate have chosen to vote by mail, in large part out of concern that going to vote in person could put them at risk of contracting the coronavirus that has killed more than 200,000 Americans.

In Illinois, a record 1.82 million mail-in ballot applications were mailed out last week — nearly four times as many as were sent out two years ago.

Morgan Dacosta, a 27-year-old college student, clearly understands the risk but is willing to take it.

“As a younger person, I am really ready and willing to stand out here and brave the cold and the COVID and to make sure that my vote is counted,” she said.

Voting in Illinois: What you need to know for the 2020 general election

Inside the “Super Site” polling place in the downtown Loop, concerns about the coronavirus were front-and-center. Social distancing was enforced and voters were required to wear masks.

The voting site will be open every day through Election Day.